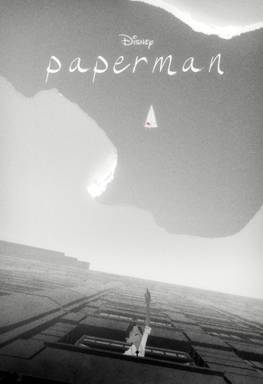 Paperman is a beautiful animated short that debuts in front of Disney’s Wreck-It Ralph on November 2.  While the short is only about 15 minutes long, it is a story that resonated with all me and kept me smiling all day long! 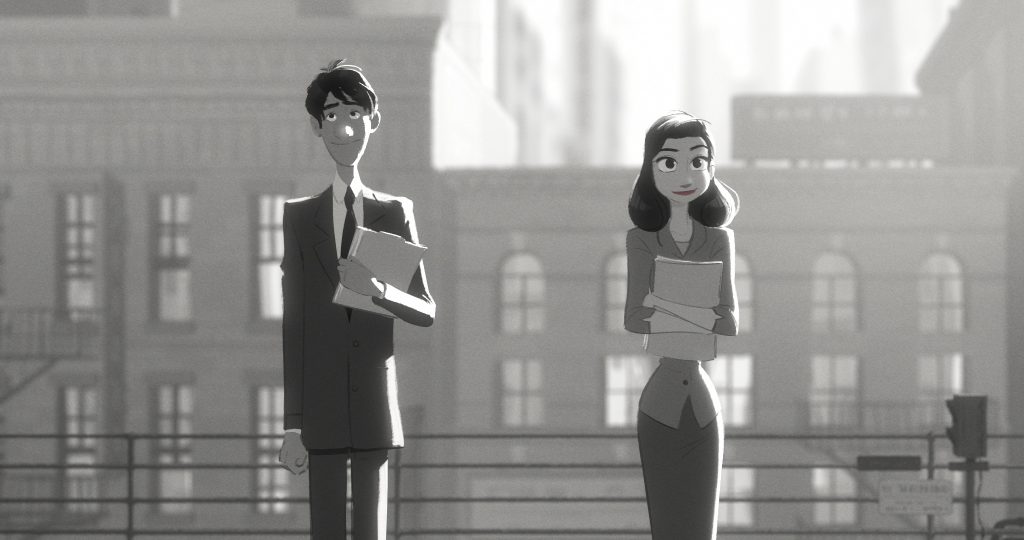 Introducing a groundbreaking hybrid approach that seamlessly merges computer-generated and hand-drawn animation techniques, first-time director John Kahrs takes the art of animation in a bold new direction with “Paperman,” a new short from Walt Disney Animation Studios that debuts this November with the Disney feature “Wreck-It Ralph.” Using a minimalist black-and-white style, the short follows the story of a lonely young man (George) in mid-century New York City, whose destiny takes an unexpected turn after a chance meeting with a beautiful woman (Meg) on his morning commute. Convinced that the girl of his dreams is gone forever, he gets a second chance when he spots her in a skyscraper window across the avenue from his office. With only his heart, imagination and a stack of papers to get her attention, his efforts are no match for what the fates have in store for him. 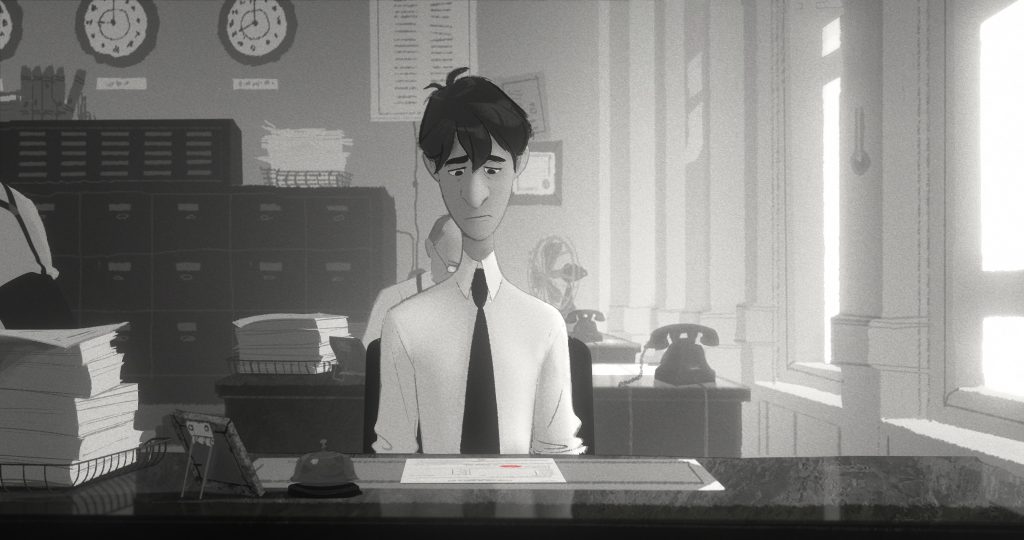 Last month, I was able to see the short during my trip to LA.  I was absolutely amazed about the impact that an animated short could create in me.  I loved it!  The animation reminded me of older films such as 101 Dalmatians. It was in black and white which I thought added a lot of character to the film.  It created a classic world, yet it was also very modern. The story also is told through animation and music only.  No one actually talks during the film which is a beautiful way to present an emotional film like this one. 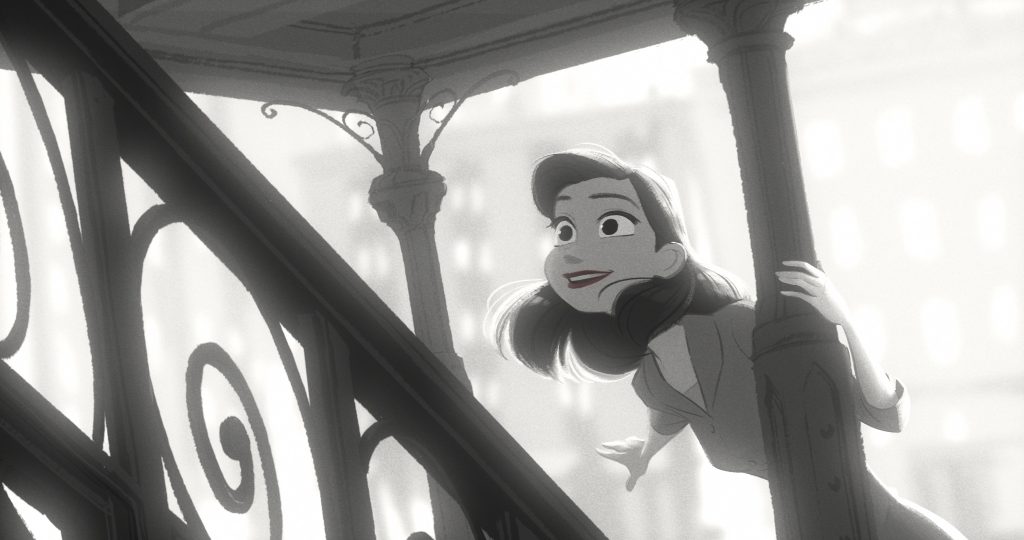 The story was such a sweet story.  I know that I have often thought about my place in the world and how I need to take a bold step out of my comfort zone in order to be fulfilled.  To me, that is what this film embodies.  It is about a man and women, but it is also about taking chances and seeing what happens.

During our Wreck-It Ralph press day, I was able to speak with Producer Kristina Reed about Paperman and how the animated short came to be.

The Idea behind Paperman:

This idea came about early on in John’s (Director, John Kahrs) career. Everyday John would commute through Grand Central Station as a single guy in his late 20′s. There would be throngs of people moving through the train station. John would be thinking to himself, why am I not having a more happy life? I’m a single guy in New York City. I should be on top of the world. Yet, John felt really rather lonely. Every once in a while he’d make a connection with somebody, eye contact in the station and think is that the girl of my dreams? Then she’d be gone. This short came from those times.

A little bit about how Paperman’s animation came to be:

I’m a working mom too. I produced a short that has been lucky enough to be the one that’s going to go out in front of Wreck-It Ralph. Disney hasn’t put a short in front of a movie in quite a while. We’re really just thrilled that it’s getting the attention it’s getting.Just to give you a little background, when I first came to the company in 2008 from DreamWorks, I was the head of production. And at the time, we had Princess and the Frog going on which is a hand drawn film. We were working on Tangled, the CG film. We were having a lot of conversations among the executives about if we were thinking about this properly. We had this line going down in our crew. We had separated our hand drawn talent from our CG talent. We wondered if that the right way to be thinking of things. It was like being in two different businesses and neither business was quite as smooth as we wanted it to be.

We’re having to come up double the amount of content to feed both pipelines, etc. There was this notion that we’re the only studio in the world that has this breadth of talent and is there something we can do by actually matching them together? Is there some new place we can go visually that no studio has gone before? John Kahrs came forward and pitched this project, Paperman. Since I had been pounding on the table and saying there’s more to this and we’re not thinking about it the right way.Everyone turned to me and said you produce this one which I was thrilled to do.

How long did it take to create Paperman?

It was about 14 months in all. There was stretches of time where it was just the director and me. One of the things about making a short at Disney Animation is it has to fit in the cracks between our big features. For most of the project, there were never more than 10 people on it. Then every once in a while, we’d get a phone call and it was like there’s ten animators available for six weeks. What can you do with them? So we’d scramble around and figure it out and bring them all onto the show and have them work.

Will Disney do more of this technique?

We want to play with it some more. We feel honestly like it’s somewhat our responsibility as one of the premiere in animation houses and certainly the house that invented this art to put new visual looks out into the world for other artists to respond to. We’re hoping that this inspires other folks to come in and play with looks. We feel there’s a vast frontier out there that is not just hyper real CG which is where a lot of animation’s going right now.
There’s nothing wrong with that. There’s many stories that form can tell very effectively, but it’s also partially responsibility to our roots. We feel like we want to make sure that we’ve explored every avenue of artistry that we can with the talent that we have. John is moving on to test this technique  in color because it’s very easy to say that’s a cool technique. It really lends itself to the story and only stories in the 40’s and only stories in cityscapes.So he is going on to try and test foliage and color and see what that technique will look like and telling a different kind of story. And we’ll see where that goes.

You can see Paperman in theaters before Disney’s Wreck-It Ralph on November 2.