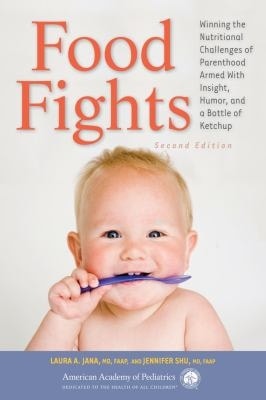 One of my biggest struggles with TJ is his eating habits.  I thought I would be the mom who got her child to eat sushi and hummus.  Vegetables were going to be a part of his vocabulary from day one.  It was going to be fantastic!  Well what a fantasy that was.  We have struggled with the eating thing since he moved to table food.  It seems like my perfect little boy was no longer perfect and it has been a tough road ever since.

I have needed all the help I can get when it comes to food.  I recently was sent a copy of the book Food Fights: Winning the Nutritional Challenges of Parenthood Armed With Insight, Humor and a Bottle of Ketchup (American Academy of Pediatrics, March 2012) by Laura A. Jana, MD, FAAP and Jennifer Shu, MD, FAAP. This book is filled with great information and suggestions for picky eaters.  Here is a short excerpt from the book:

According to the dictionary, whining is defined as complaining

through the use of a high-pitched or distressed cry. By our definition,

whining is an incredibly annoying yet seemingly unavoidable part

fingernails on a chalkboard. As it relates to dining, children are quick

to the grocery store. It’s not hard to see how a child’s persistent whining

become temporarily impaired. After all, it is a whole lot easier to yield

When you find yourself faced with a child who whines about food, the

best thing you can do is come to the table prepared.

• Expect the Expected. Simply being aware that whining about food

(and just about everything else) is inevitable will hopefully allow you

• Keep Your Cool. Whining is an intuitive way for your child to get

what she wants. It’s also her way of luring you into battle. We highly

recommend that you refuse to take part. If it’s food she wants, then

find you can’t take it anymore. If whining is met with reward—or

you can expect the agony to be prolonged.

• Let Whining Fall on Deaf Ears. Once your child is old enough to

reinforcing the fact that her whining is going to fall on deaf ears.

want to eat for dinner, tell her as calmly as you possibly can that you

something to tell or ask you. If she continues to whine, go about your

business. If, on the other hand, she makes an attempt to rephrase

her “request,” be sure to acknowledge her efforts. Remember that

stopping mid-whine is a tough task at any age, so don’t expect her

to drop the whine entirely. It’s not settling for less to respond to a

What’s in a Whine?

• 9 Months. Starting as early as 9 months, kids learn to point with a purpose

as they figure out the benefits of pointing out what they want, including

• 12 Months. Children typically utter their first words, and “no” is often one

of the stand-alone favorites.

• 2 Years. By this age, you can expect your child to put 2 words together—

• 2–3 Years. Kids begin to make better use of basic manners such as

“Please” and “Thank you.” This, in turn, allows for the development of the

characteristic “puhleeeeeeeze” so commonly employed in the context of

3 Years. At this age, kids can typically string together 3 or more words in a

single sentence, and 75% of what they say is supposed to be understandable

to parents and other caregivers. This means that the “I want one!” or

“I don’t like it!” is likely to come through loud and clear for all to hear.

• 4 Years. Even innocent bystanders should be able to understand most of a

4-year-old’s speech, whining or not. A more sophisticated form of whining

may ensue, including the classics: “How come she gets to have one and

I don’t?” “You never give me anything good!” and “Please, just this once

I am still reading my way through the book, but I have learned quite a bit about what things to try and not to try.  While I don’t expect TJ to miraculously start eating everything I put in front of him, I do appreciate the little hints that the book gives me.  I also appreciate the humor, because lets face it, we can all use a little more humor!

One (1) lucky reader will win a copy of Food Fights!

A huge thank you to rolemommy who provided the products featured in this post.  While I was compensated for this post, all opinions are mine