Home » Sitting Down with Angelina Jolie


On a cool Tuesday morning, 25 mommy bloggers sat in a room waiting to talk with an icon.  There was a bundle of nervous energy in the room waiting for Angelina Jolie to walk in, and when she did, she immediately put the room at ease with her calm demeanor and genuine caring spirit.  I was immediately struck with the obvious; her beauty and presence.  It only took a couple of questions to realize that I was sitting in the presence of a remarkable woman, humanitarian, actress, and most importantly a very loving mother.  The purpose of our interview was to talk about her most recent title role as Maleficent in Disney’s newest film.  We talked about why this film was important to her as well as the lowdown on her incredible transformation into Disney’s most feared villain.  She opened up about her humanitarian efforts and life as a busy parent. 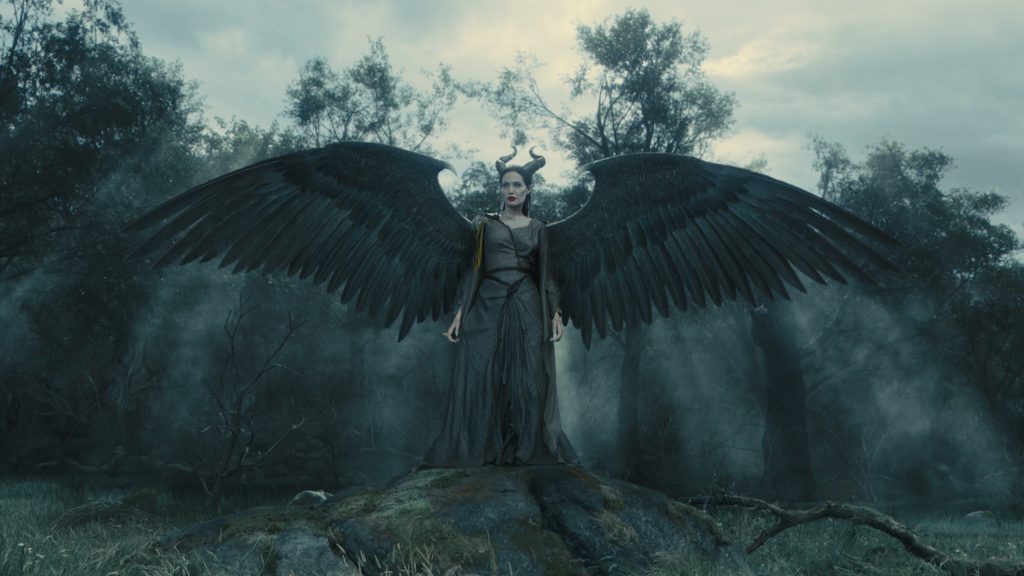 When asked about what drew her to the role:

I read this script and I was so moved by it… I was moved by it as a mother. But I was also really moved by it because I thought of myself as a little girl, and I thought of all the kids I know, and I just think of that feeling, feeling different, feeling outside.  Also as a woman, feeling abused and this ideal if you’ve ever been abused and then you  put this wall up.  And you become darker and you’re not able to be this soft person that you were born to be. And then what could possibly ever bring you back? The thing that brings her back is very much the thing that brought me back. And so, I was very, very connected to it.

When asked about how much of the  Maleficent story she knew before reading the script:

I didn’t really know anything. When I was a little girl I was fascinated by her.  I didn’t really identify with the princesses, at the time.  Princesses have gotten a little more modern.  I thought she was just, it’s like a little kid seeing Marlene Dietrich for the first time.  It was like seeing this elegant, powerful woman who seemed to be having a great time, just her voice,…  So I was a bit fascinated by her.  When there was a rumor that the movie was going to be made, I got a call from my brother.  And he was like, Ang, you’ve got to, you’ve got to make a call to Disney, you got to try to get in on this.  So I was very happy when I got the call.  So just the idea of a Disney movie, having children and just being a big kid myself, and wanting to do a little bit of that was fun.  But I really didn’t know, we didn’t, we couldn’t. I joked with Linda, I said, how could you possibly make a story where people have any connection to, or empathy for, somebody that curses a baby?  It’s just, it’s going to be impossible.

And, I think she did an extraordinary job. 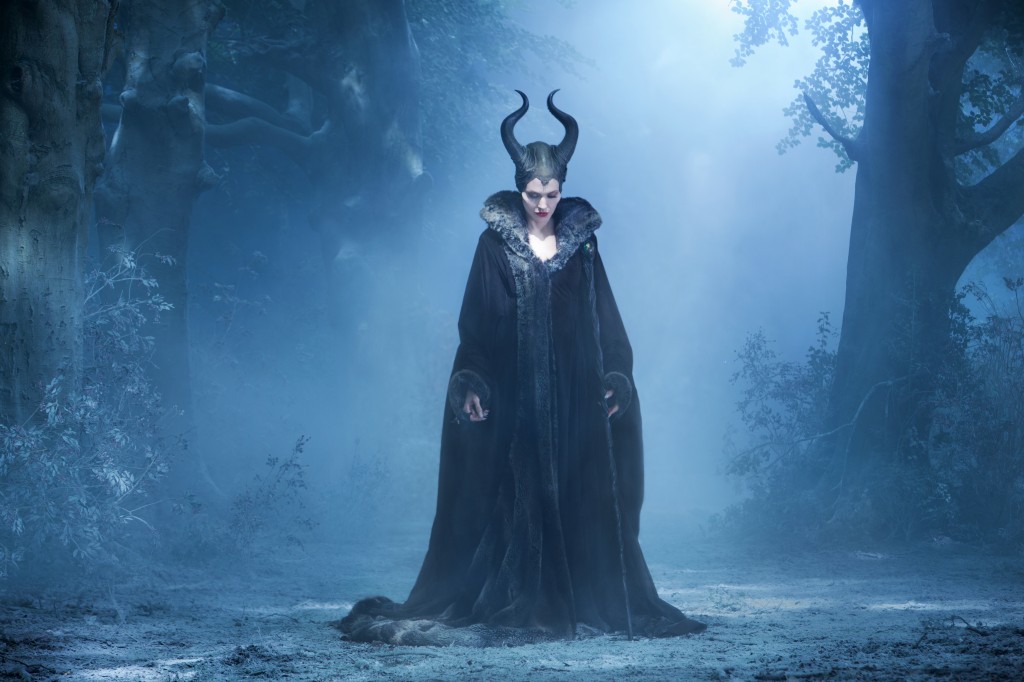 When asked about hair and makeup and the time it took to get ready to play Maleficent:

I think it was about two and a half hours at the end of the day.  Which wasn’t as bad, we had a great team.   They’d work together, Tommy and Arjen, and they kind of, we did it all at one.  It wasn’t too bad.

Was the head piece heavy?

They were so sweet in that they worked so hard to make it not heavy.  My hair was in these really funny little-little buns in order to get the head piece.   My hair was used as kind of the thing that held the head, the-the horns on. They made it very lightweight.  And then they also had detachable horns, partially for weight, and also because they kept knocking myself out.  If I’d go out the door, because I was about seven and a half foot high. So the first few days, I was just a complete mess. So they made them,  I could snap them.

What did you think the first time you saw yourself in full makeup and costume?

I was really happy because we went through a few stages where, in trying to find her, we had a few that weren’t so great. There was a period where we thought, okay, well she’s-she’s got wings, so she’s part bird fairy, maybe she had feather hair.  So we went kind of in many, many different directions.  And then at the end of the day, we kind of said, it has to be that, because it is a real film and she has real scenes and emotional scenes, it can’t be so much makeup that you’re starring at some pasted makeup.  The soul has to come through.  So it had to be enough to be a creature,  enough to be the worldly, but still be able to have very serious scenes.  I think they-they did an amazing job.

When asked about the experience of creating her voice as Maleficent:

My kids helped me find it.  I always tell stories, I’m sure  all of us have a few voices.  I was giving them baths and I was doing this thing where a few nights in a row I would tell them stories in the bath.  I was trying out voices and a few they’d say, please stop.  (I kept going with the voices) , and they’d listen and they’d kind of be more engaged.  I kept trying and trying and trying.  And then I did that voice and they couldn’t stop laughing.  So I kept doing it more, and more, and more, and more, and more.  They still make me do it.  I had to do it the other night for bedtime.  I would kind of run it by them, and if they, if it made them happy, or made them smile, or they were interested in it, you know, then-then it was right. 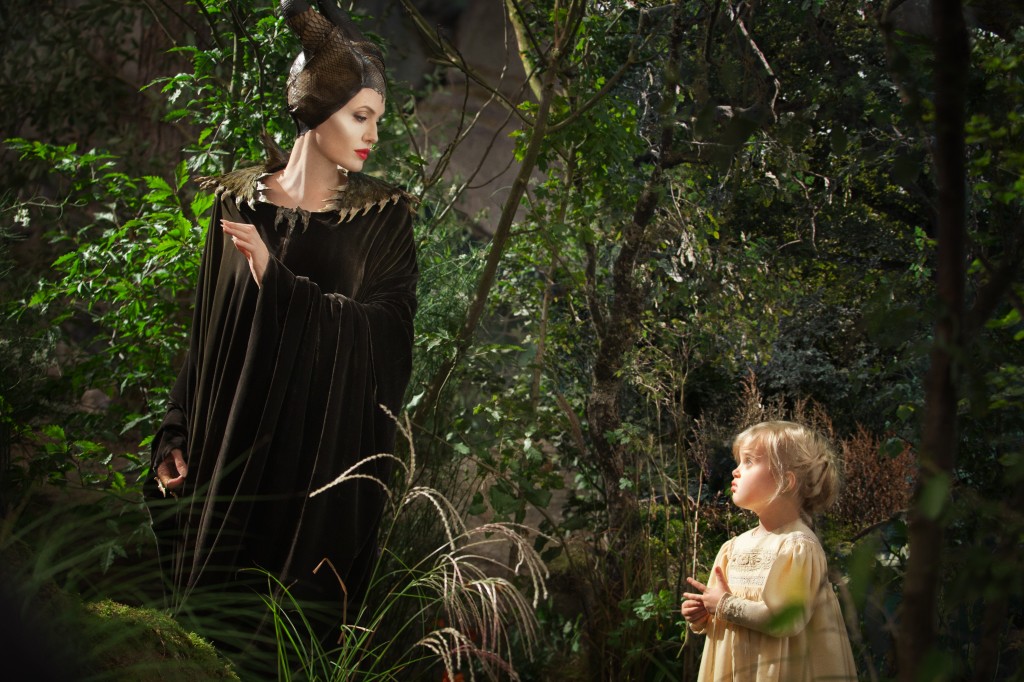 When asked about casting and working with her daughter in the film:

It was a tough choice to do it.  I mean, I think everybody knows the reason why.  I was really scaring other kids, But it’s (the movie) not frightening for children.  But I did scare.  I kept thinking I was a Disney character and I’d want to talk to them.  And they’d get mad and essentially leave. What four or five year old  little girl is not,  I be really mean to and say things like, I don’t like children?  We realized it was probably Vive.  It took us a while to make sure that that was an okay thing to do.

(On the set) I just wanted to play with her.   It was really fun.  The first day she had to catch the butterfly, like any four year old, she just decided she didn’t want to.  So there’s some really, really funny outtakes of Brad and I…  I’ve actually got the stick with the blue ball, that’s supposed to be the butterfly and I’m kind of running in front of her.  And Brad’s off the edge of the cliff, kind of trying to like dance and make her jump into his arms.  She made us work all for that.  It was the hardest working experience…  the people at Disney did say it was the funniest dailies that they’d ever seen. It exists somewhere, I haven’t seen them, I should get them.  But it-it was lovely.  It was lovely to do it.

When asked about her humanitarian efforts and how can we start small in our own community to do good for others:

The most important thing we do is we raise our children with love and compassion to become great people and thoughtful of others and that’s the most important thing.  If everybody did just that, we’d have a very different world.  And encourage our children’s education and-and help them to be conscious of the world around them.  I think mothers have the most powerful role.  There was even examples of Taliban fighters who stopped because their mothers stopped them.  Because the mothers became educated.  They couldn’t stop the men, but they, educate the mothers and the mothers got them back home.

The mother’s a powerful thing.

I think beyond the there is so much to connect to and there is so much that can be done.  As you see now with the situation with the Nigerian girls, that’s not government, that’s the masses speaking out and pushing for government change.  It sometimes doesn’t feel like every voice counts, but it really does. There’s a conference in June I’d love you to be aware of that I’m doing with the Foreign Secretary of England, June tenth to the thirteenth. It is called PSBI, it’s the largest summit ever to end sexual violence in conflict.  It’s in England, it’s open to the public.   So I…  we’ve realized that it can’t, it’s not just governments, and it’s not just NGO’s, everybody has to come together. NATO will be there, peace keepers will be there, governments will be there, NGO’s, and victims, and doctors will be there.  So everybody together will spend four days.  I think that’s what these things take, it takes all of us very tightly working together. 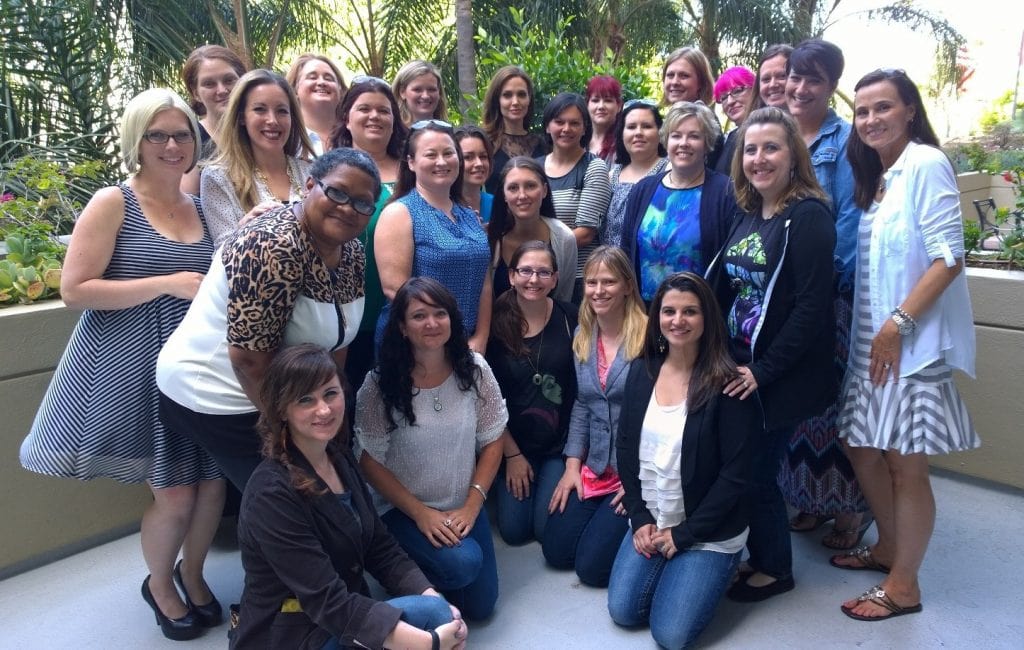 Angelina was very sweet to take a shot with all of the moms after our interview.

When asked about how she balances everything in her life:

I’m at a very lucky position.  I have a supportive partner and he and I are able to take turns working often.   When you make a film, it doesn’t take all year around.  When I direct it does, but I get to decide when I leave in the morning and when I come home at night, and I can edit in my bedroom. I would be there in case there’s an emergency with the children.  So I have a very rare luxury with my job to be able to have my kids with me on set every day and home school.  Other mothers have it much harder than I do, and don’t have the means to have the assistance I do. I don’t feel like I, by any means, do anything exceptional.  My mom was a single mom and she had a lot of difficulty and she gave up her dreams to make sure she could take me to my auditions and support me. Nobody acknowledged her for what she did, you know, so that was hard.  But, my-mine’s not too bad at all.  I can’t complain.

Angelina is currently directing the film Unbroken that is slated to release this December.  Maleficent hits theaters May 30th.

Next week I will be posted more interviews from the cast and crew of Maleficent… stay tuned!