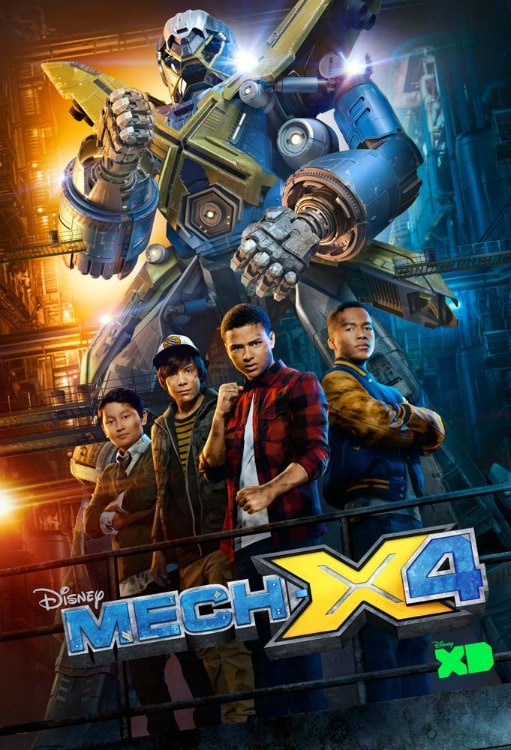 The Disney Channel has gone technology wild with its newest show MECH-X4.  MECH-X4 will premiere Friday, November 11 on Disney Channel and on Saturday, December 5 on Disney XD.  Here is what you need to know about the new show.

Ryan Walker is a typical freshman at Bay City High, until he discovers he is a ‘technopath’ with the extraordinary ability to control technology with his mind. His superpower mysteriously awakens a 150-foot robot known as MECH-X4 and Ryan can command its every move. When monsters suddenly begin to descend upon the city, Ryan recruits his two best friends, Harris and Spyder, and his older brother Mark to help him operate the robot’s high-tech defense system while he pilots MECH-X4. The four unlikely teenage heroes must quickly learn how to work together as a team to maneuver MECH-X4, their only hope of saving their town and ultimately the world. 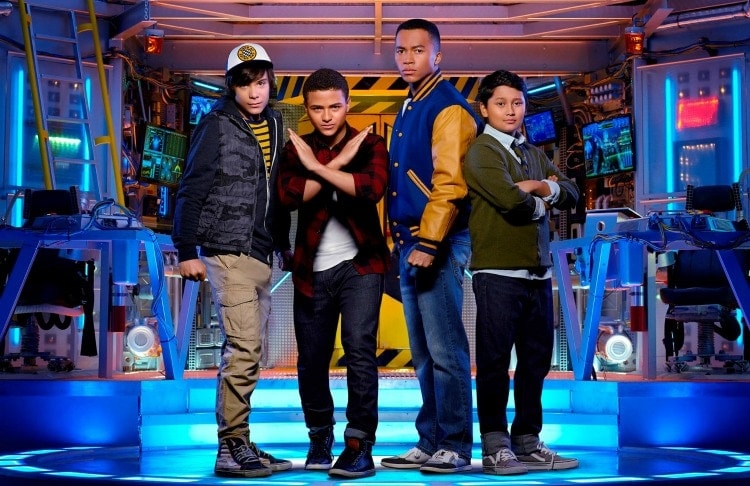 When I was in LA last month for the Doctor Strange press junket, we got the opportunity to meet with the cast and crew of MECH-X4 to learn a little bit more about the new show.  I have to say that these four actors where a joy to interview and talk with.  I found it refreshing that they are approachable and are really excited to be apart of a Disney show. 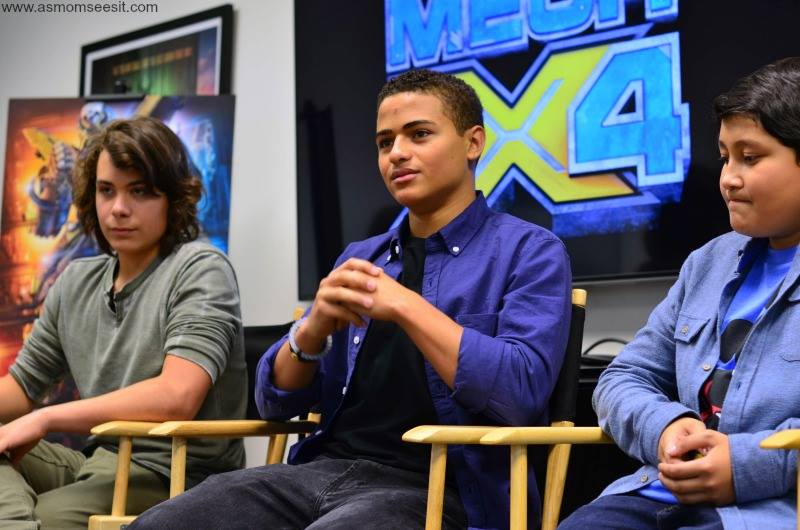 Pearce Joza plays Spyder, Ryan’s goofy friend who is always up for a good time. We asked him how he was like Spyder.

I like to say I’m like my character and not like my character. Spyder’s very crazy and he likes to do a lot of daredevil stuff type things. I lived in Colorado for a long time so I like to go out back and play in the pond and climb trees or whatever. I also love school. I’m taking college level courses and Sypder’s not very good at school.

If Pearce could have any superpower he would choose Telekinetic powers.

It’s pretty much controlling anything you think with your mind. See that water bottle? It’s over here now.

Landing a Disney job is a huge deal.  We asked him how it had changed his life.

I’m from Colorado. You know, of course this has changed my life with all the things that are happening, and this is crazy, right? But, I think what really changed my life in the whole broad spectrum is just moving out to LA when I was eleven. Like since I was nine I was trying to convince my parents to let me go out and act in movies and TV and whatever. For two years I worked at it. And then finally I got out there. I don’t get to see my friends from Colorado that often, but everybody from there is still really cool with me. It’s nice.

Nathaniel Potvin plays the main character Ryan Walker. He tries to get out of the shadow of his very popular older brother.  He finds out that he can control technology and it starts a whole new chapter in his life.  Nathaniel find that he is a bit like his character in the show.

I’m kinda like my character because, Ryan is always rising to the occasion. So whenever he has to fight a monster or even stand up to his brother, I’m kinda like that in some ways. Also, I have two older brothers so I know exactly what Ryan goes through on a daily basis. And, Ryan loves to skateboard. I love to skateboard. So there’s some similarities between us there.

If Nathaniel had a superpower it would be teleportation, mainly for convenience sake.

If I had a super power it would probably be teleportation because who wants to pay for airline tickets? No one. No one does. Also, it would just be really convenient. If I got locked out of my house I could just teleport inside my house

Nathaniel’s life hasn’t changed much since being cast in the show.

I would say that it’s actually pretty much the same because I have great friends, and I have a great family, and I love them so much. When I told them that I was gonna be on Disney, with Steve, they were like, ‘oh, that’s cool. But, I asked you what the homework was,’ or something like that. So I’m really blessed to have friends who don’t really care about what I’m doing, but they would love to support me and they’re just great. 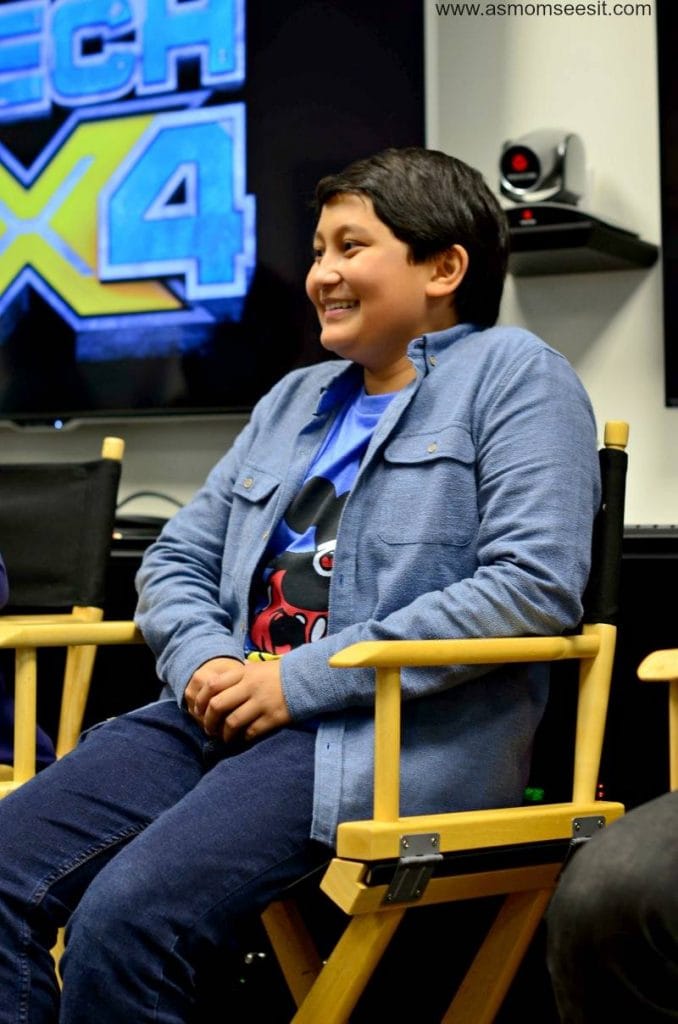 Kamran Lucas plays Ryan’s smart friend Harris on the show.  He always has an answer for everything and the crew depends a lot on his advice. He finds that he and his character are very similar.

Kamran has wanted to be on a Disney show ever since he was a little kid.

For me, I’d say I’m still the same person, but the feelings are a lot different because ever since I was five years old I’ve always wanted to be on Disney Channel and do the wand thing that I’ve seen all my heroes do, especially Selena Gomez, God bless her soul.  [His cast mates chimed in and told him that she is still alive]

First of all, I just I love her… We have connection… It’ just all surreal. I never thought I’d be in the position that I am. Honestly, I’m just so thankful because I have great friends who are there to support me. And you know, being in Canada – I love being with these guys. But sometimes I’m away from the friends that I’ve grown up with my whole life. And it’s great to know that even when I can’t see them, they’re still there. 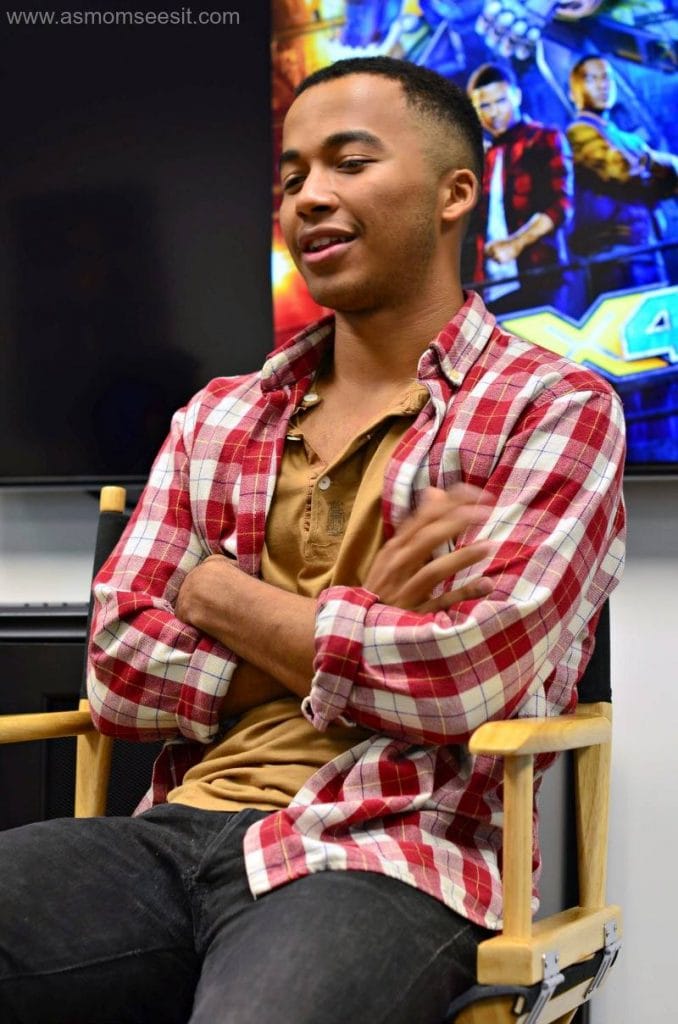 Raymond Cham plays Ryan’s big brother Mark. He is finding that being on a Disney show hasn’t changed him much but he is getting messages that make his day!

I would say it didn’t change too much just because the show is not out yet. But, I would say every once in a while I’ll get an Instagram notification from a kid and they’ll say, ‘I can’t wait for your show’ or something like that. And it’s really exciting. It makes you really happy. It’s inspiring or just seeing kids excited for something that I’ve worked really hard on, you know what I mean? That’s really cool. I didn’t really experience that before.

Raymond has wanted to be an actor for a very long time.  He loves performing.  We asked him what he likes to do when he is not on set and this is what he had to say…

I wanna say something crazy like skydiving or something like that, but really I just sit home and watch movies. That’s all I really do. I mean sometimes we’ll go go-carting, which I really love doing. But yeah, it goes back to the acting question, I love watching movies just to study. That’s pretty much what I love to do. 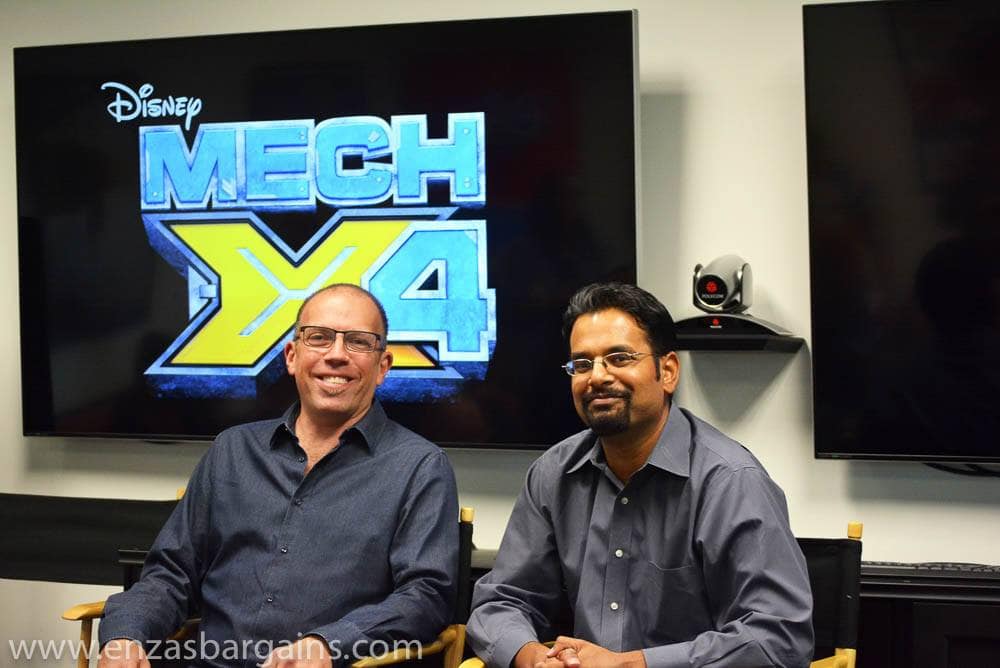 We asked Executive Producers Steve Marmel and Anupam Nigam about their influences for the show when they were creating it.

ANUPAM NIGAM NIGAM:   And I love on Transformers. I grew up on Omega Supreme. And for me it was also Godzilla. It was a big influence. In fact there are several Godzilla movies where he fights a giant robot. I made him watch them.

How did the idea of MECH-X4 come about?

STEVE MARMEL:  It started with, hey, wouldn’t it be fun to do a show about, four kids that just happen to have to work together with a giant monster fighting robot. And then every step of the way through development, it sort of evolved. Like, wouldn’t be fun to actually have great special effects? Wouldn’t it be great to do it single camera and make it look like a movie? And then wouldn’t it be great in this, in this day and age where storytelling is binge and serialized, wouldn’t it be cool if we could do a long story over a season? And so it started with an idea, Disney went for it, and then all of a sudden, this great team started coming together and bringing everything to it. ANUPAM NIGAM comes from a world of serialized storytelling and the director, Zach, has a passion for the nostalgic Goonies, ET vibe, that’s sort of an Amblin feel of it all. And it all just became this thing through collaboration and really talented people.

Anupam Nigam was a scientist in college. We asked if he used that type of knowledge towards the show?

ANUPAM NIGAM:   Oh, it actually comes up a lot, actually. We, do a lot because Ryan has a super power, and sometimes we have to explain sort of what’s going on his brain. How does he connect to the robot, that kind of thing. So you know, he gets injured- you’ve seen in the set when the robot takes a hit, he takes a hit. So we do a lot of sort of medical stuff. Actually we have a separate set that’s just a med bay where it has all kinds of cool scanners and medical stuff to sort of check out Ryan, and make sure he’s okay. We make up a fair amount of pseudo-science.

I know you are all excited to see what it is like being inside a giant robot. We asked them to talk about what is inside the MECH-X4 robot.

STEVE MARMEL:   As you said, it’s a 150- foot robot, there’s a lot to explore. It has a job to do, and then what would a club house feel like if it was in a giant monster fighting robot. And those are the two things that come together. But they all have to work for the primary mission which is to save the city, and save the world.

ANUPAM NIGAM:   And you’ll see all the rooms besides the ones you saw in these first two. As we said earlier, we have a med bay where Harris does a bunch of cool stuff.

The excitement in the room was dense and I couldn’t help but get excited along with them. I have seen the first episode and you are going to want to tune in this week when it airs.

A huge thank you to Disney for flying me out to LA for this press junket.  All opinions are 100% mine.