I had the chance to interview Laura Dern while on a sponsored trip for #TheLastJediEvent on the behalf of Disney. While this post is partnered, all opinions are mine.

This Friday, Star Wars: The Last Jedi opens in theatres across the nation, and while there hasn’t been a whole lot of information given about the new film, I was able to interview a couple of the actors who are playing new characters in the movie, including Laura Dern who plays Vice Admiral Amilyn Holdo.  We are all familiar with Laura Dern and some of the fierce, female roles she has portrayed over the years. I have a strong feeling that this role is going to be one of my favorites!

There is a new Boss in Town

While there was a lot she couldn’t tell us about her role as Vice Admiral Amilyn Holdo in Star Wars: The Last Jedi, we were able learn that she is the new Resistance leader, a Vice Admiral, and that she has a nice shade of purple hair that even her mother approves of. 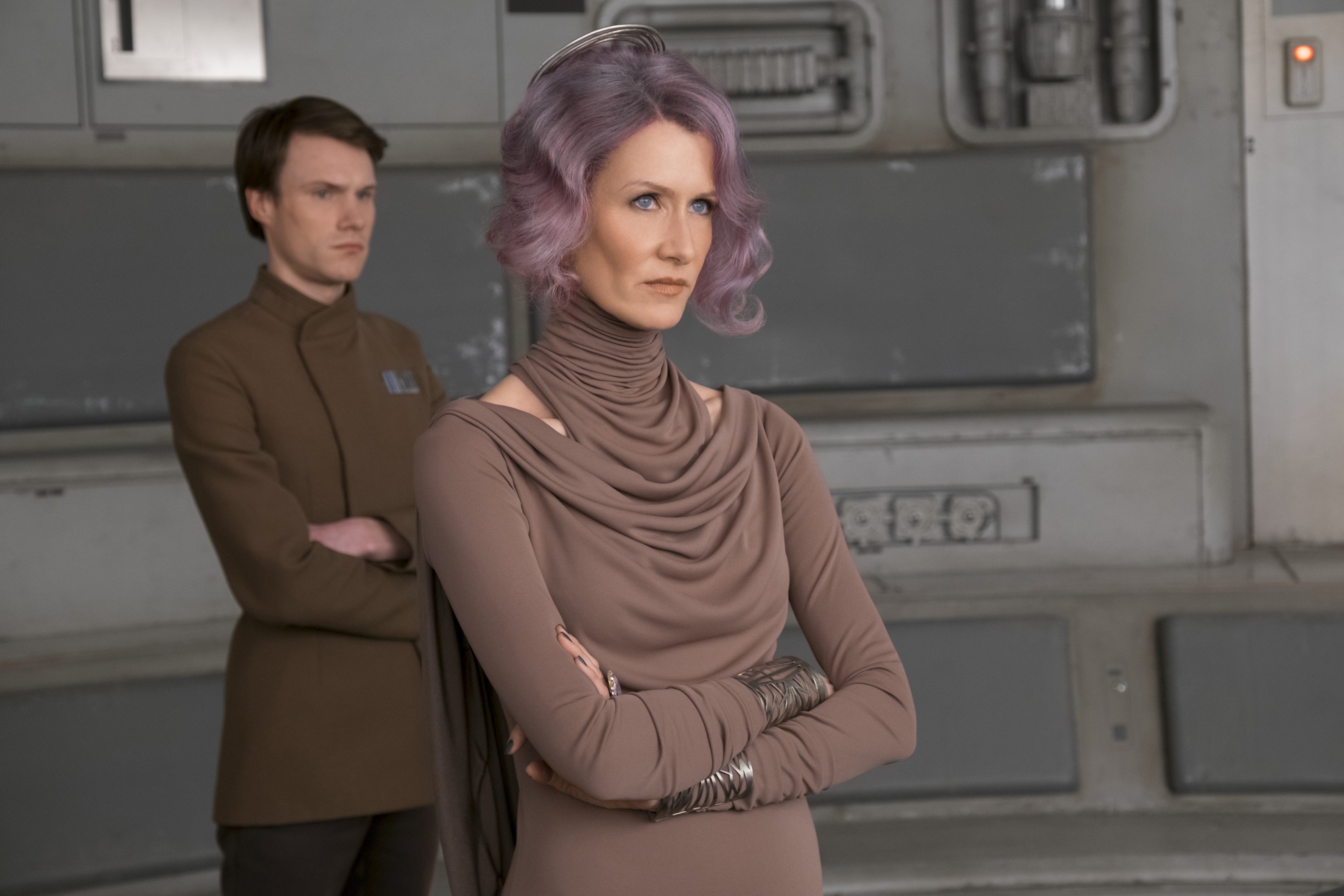 Laura told us that she had the privilege of collaborating on the character with director/writer Rian Johnson. She was able to talk with him about how to present a powerful woman. She told us that she was appreciative of Rian and Kathy Kennedy and all of the producers to allow a powerful female character to not only be a strong but also feminine. She was grateful not to be put in guys’ clothes.

I feel excited to join this amazing legacy of strong Females in Space starting with our magnificent icon of Princess Leia”. – Laura Dern

She looks tough and feminine and that, in my opinion, is a great combination. 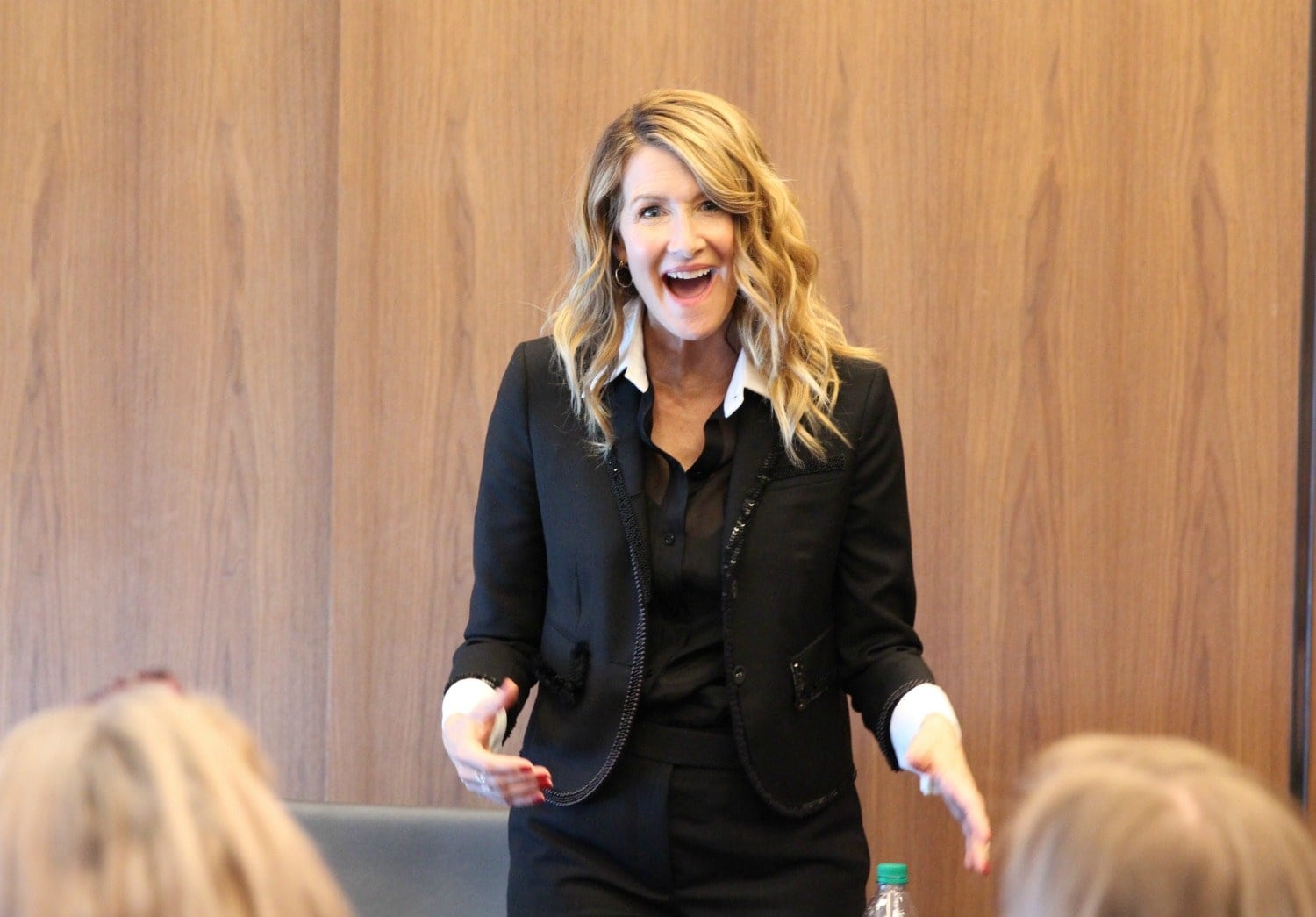 How Laura got involved with Star Wars

Star Wars was not something on Laura’s radar. She has a love of independent films and was approached by Rian who called asking to have lunch and talk about something. And then Kathy Kennedy simultaneously called to just to check in and say Hey, how are you? During lunch, Rian started describing something he was looking for in a Character and wanted Laura to help invent this with him.

And it all sounded great and it wasn’t until sort of the end of the lunch, [WHISPERS] “It’s in Star Wars.” And I like “Oh my God!” I was listening to this amazing story, and that’s what’s incredible about Star Wars.

He started describing a world that was about the complexity of being a human being and the battle between light and dark, not knowing which would win, and the struggle of family and the hero’s journey. You feel it all and you realize that it is what filmmakers that I’ve worked with in independent film have longed to explore. He described this complicated female character in such a beautiful way also spoke to something that rebel filmmakers have asked of their collaborators, in my case as an actor of me.

And then to realize, My God, that’s what George Lucas invented. That’s why I think this stands the test of time in such a profound way. It’s not a franchise, it’s a legacy of the deepest story telling we have. There isn’t a child or an adult that doesn’t connect to that question, and that it isn’t good guy vs. bad guy. All of it is contained and being wrestled within many characters, within one’s self. Particularly this film, you feel it really in every storyline and every character in a really profound and beautiful way. 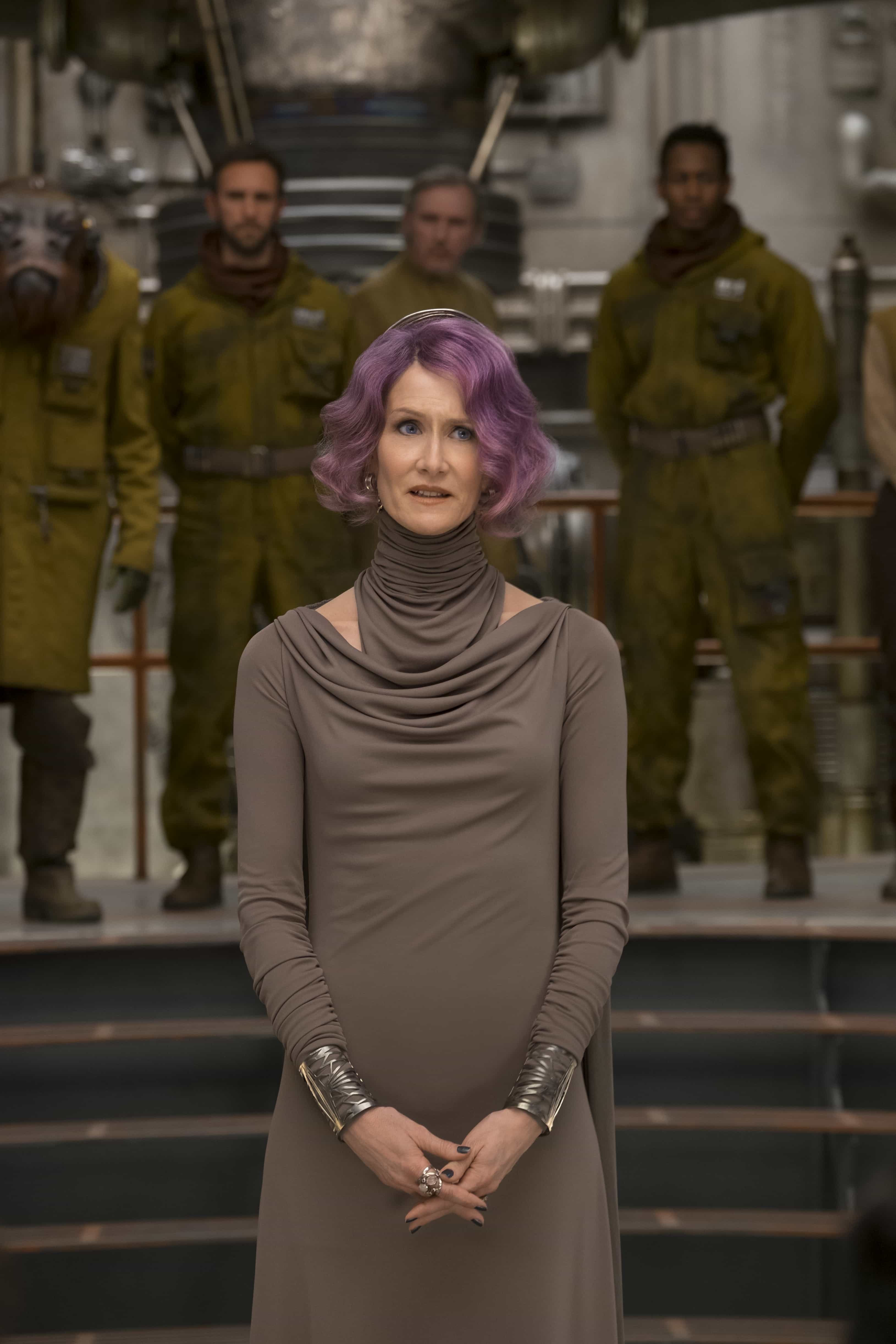 Laura Dern is Vice Admiral Holdo in THE LAST JEDI.

Star Wars was a big part of Laura’s Childhood

When Laura was about 6 years old, she stood in line for the first time at a movie cinema.  It was for Star Wars and the line was blocks long.  It really touched her.  She said she was spoiled growing up and this is why…

The spoiled part is I have been raised by Actors. I’ve been introduced into a world where movie is magical, and my parents are such fans. My mother and my father, they’re rebels and they love hard core independent film. There’s no film that doesn’t hold the potential of being the greatest thing ever.

My dad had done a Douglas Trumbull film called “Silent Running.” I’m told it was a great influence on George Lucas in that it was my dad alone in space with 3 Droids named Huey, Dewey, and Louie. I became obsessed with these Droids. Those Droids, I’m told, were a great influence toward R2D2. And I had a figurine of this Droid. Then suddenly Star Wars opened up this kind of storytelling in this massive way. So it felt personal, as Star Wars does to all of us. 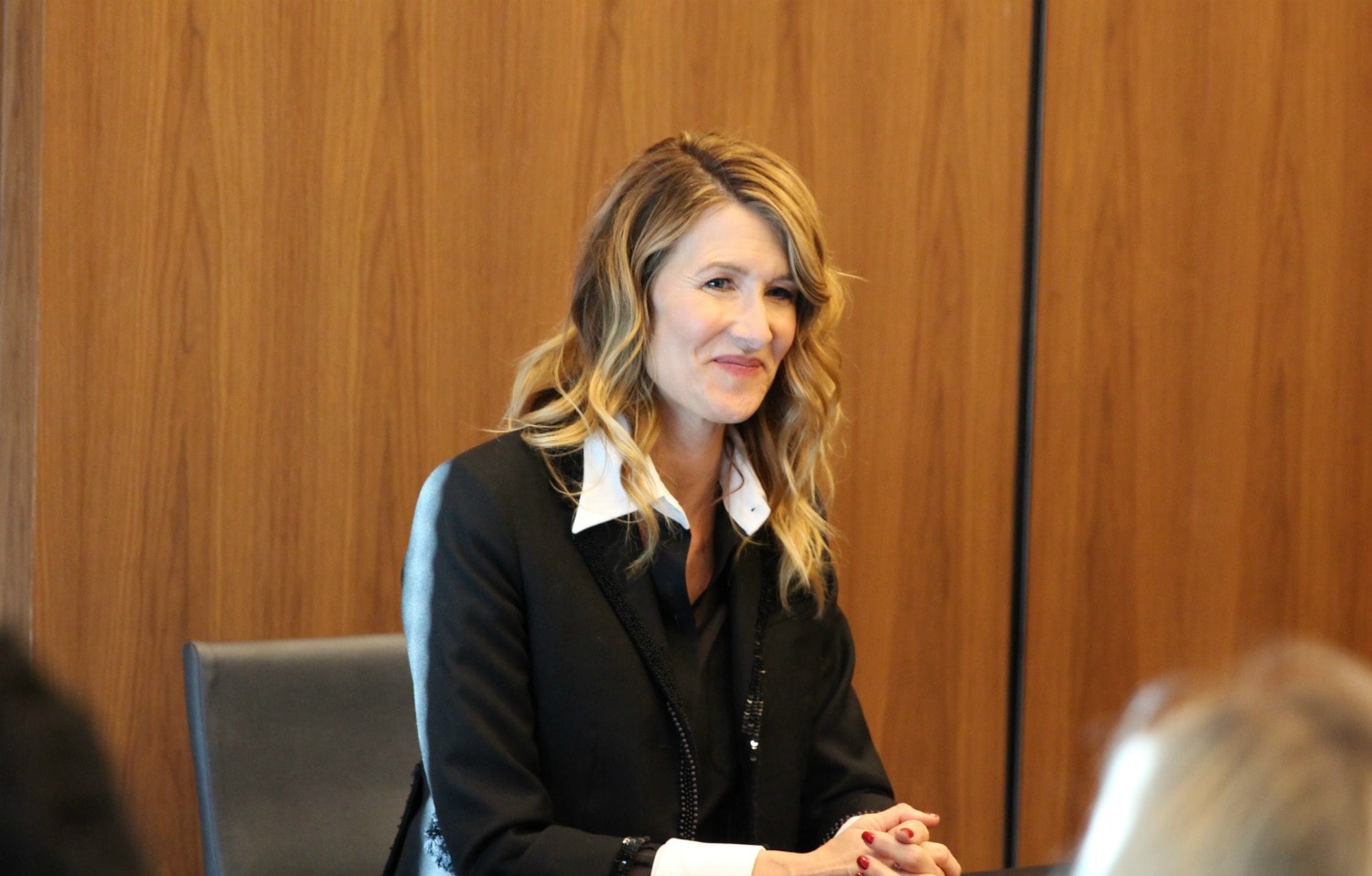 I love how Star Wars is leading the way with strong female roles.  Laura talked a little bit about how important that is for her.

I know what Leia was for me as I know she was for all of you.  It was again, not just her strength in some super heroic way but in the deeply human way that she, Carrie so incredibly embodied was this fearless irreverent sassy bold, vulnerable Female.  And all things to be true and powerful and kick butt and all of those things were in one Character. And we know how rarely we see that.  So that meant the world to me and now my daughter and all her friends have this in Ray and soon other Female Characters in this movie and it’s really exciting to see what the different Females do. 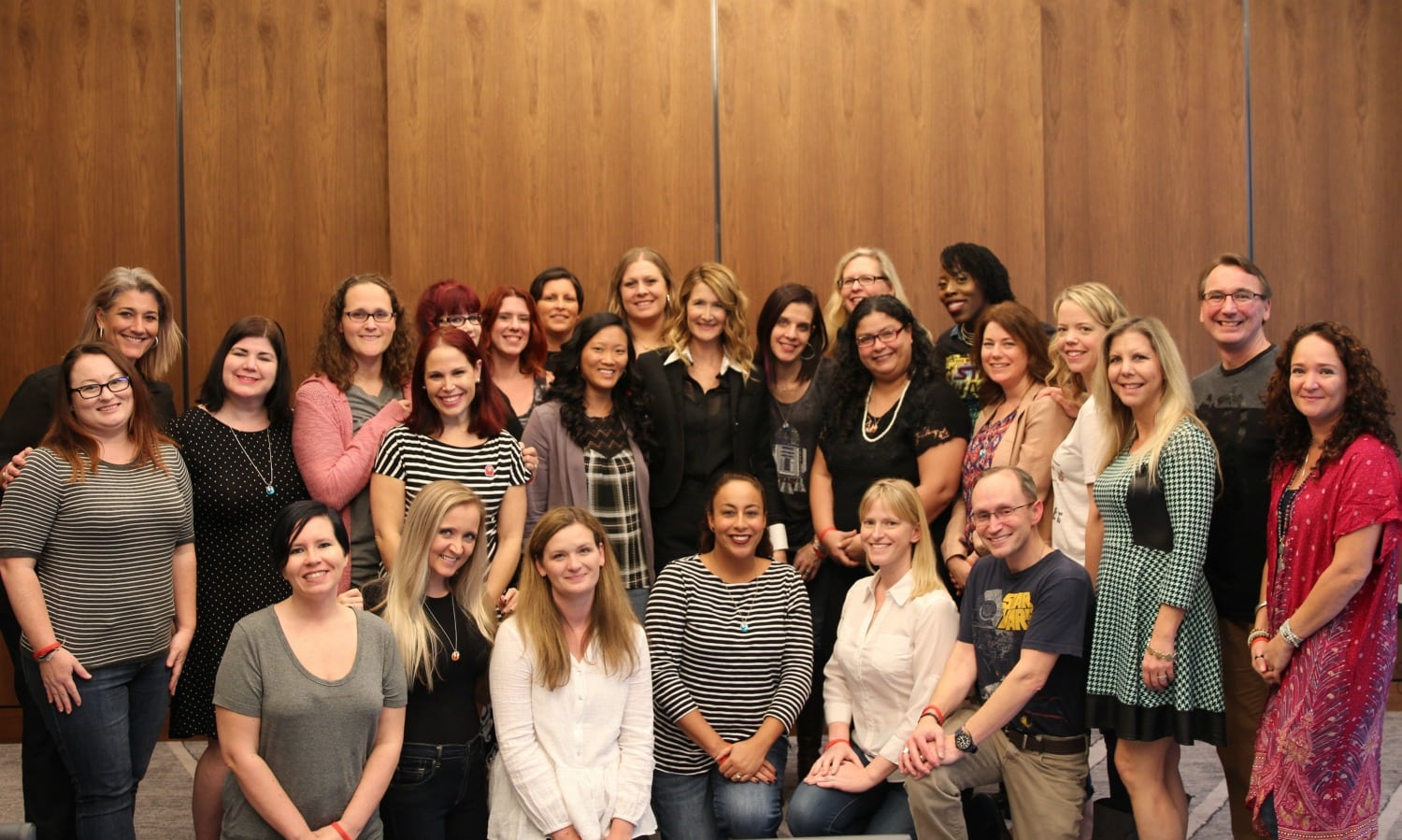 And in case you are wondering, if Laura Dern had her own lightsaber, it would be a rainbow one!

I can’t wait for this Friday when I can see a very powerful, yet feminine, Laura Dern in action for myself.   Have you gotten your tickets yet?

Be sure to revisit this entire week when I share the interviews from the global press event including our interviews with Gwendoline Christie (“Captain Phasma”), Domhnall Gleeson (“General Hux”) and Kelly Marie Tran (“Rose Tico”) and the entire cast of The Last Jedi during our global press event.