One reason I love watching Marvel films is that all of the characters are well developed and essential to the story being told. Guardians of the Galaxy Vol.2 is no exception to this. The main cast is fantastic, but the supporting roles are phenomenal.  Last month I sat down with three, very strong female actors who play vital roles in the upcoming GOTG sequel, Karen Gillan (“Nebula”), Pom Klementieff (“Mantis”) and  Elizabeth Debicki (“Ayesha”).  We talked about getting ready to play the roles, what they wanted young girls to take away from their roles, and what it feels like to be a part of the Marvel Universe.

The makeup process is always a big deal in a Marvel movie.  All three of these characters had massive amounts of makeup and we asked the ladies about how long it took to get make-up ready.

Karen:   Well mine takes about four hours in the morning, and essentially I have the character’s skin glued to my face, which is really as close as I could possibly get to her which is pretty cool.  And it’s kind of intense and slightly claustrophobic.  It’s definitely become like part of my ritual, in terms of like getting into character.  Like one time I did a rehearsal without the makeup and I did not feel like her at all, so it’s sort of become like a vital part of the process for me which is kind of cool. 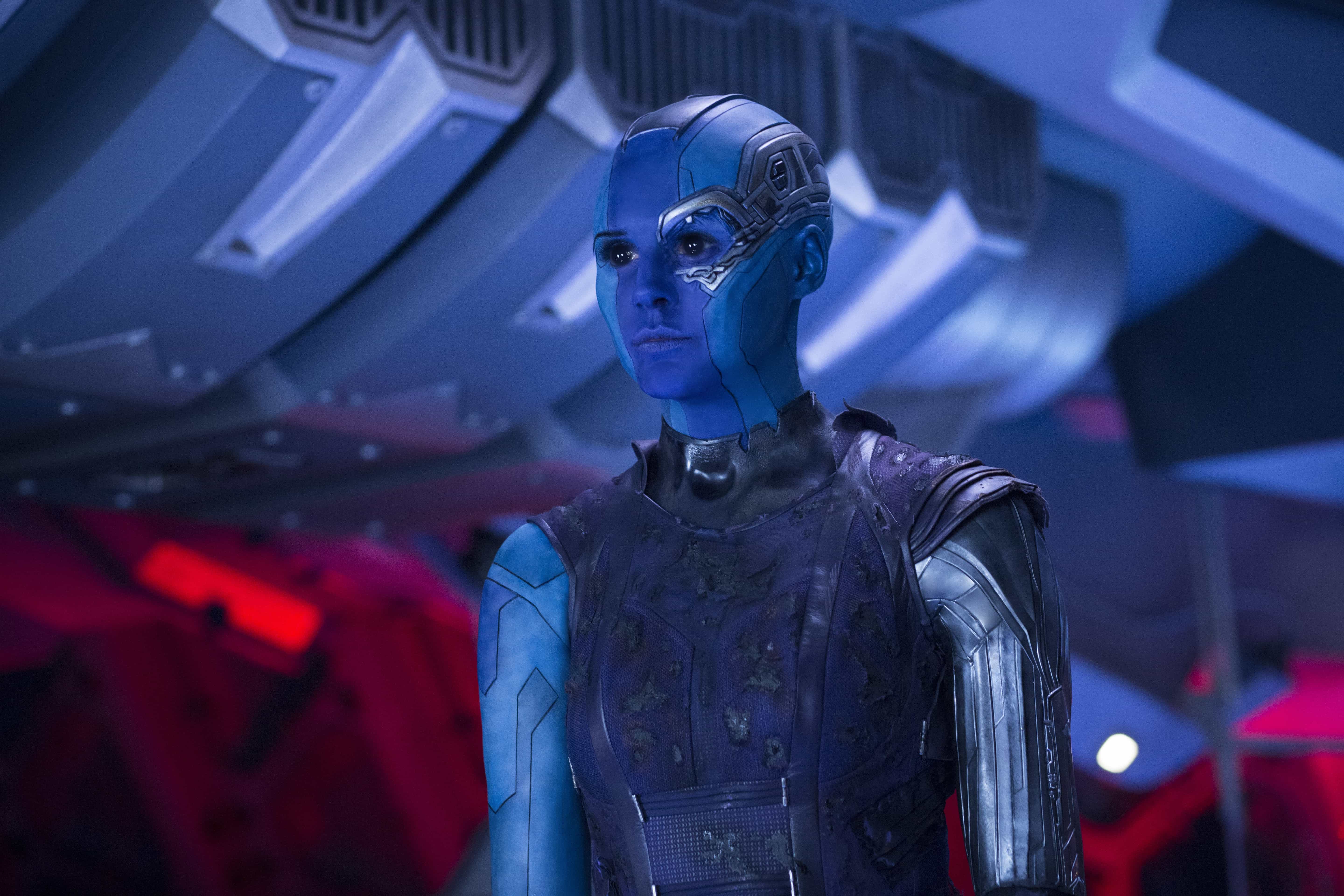 Pom:  For me it’s much easier because it’s my skin tones, so it’s like a beauty makeup in a way.  I need two hours to get completely ready, hair makeup and clothes.  I wear a prosthetics on my forehead it’s just the beginning of the antennas, and then with the C-G-I they make it much bigger. 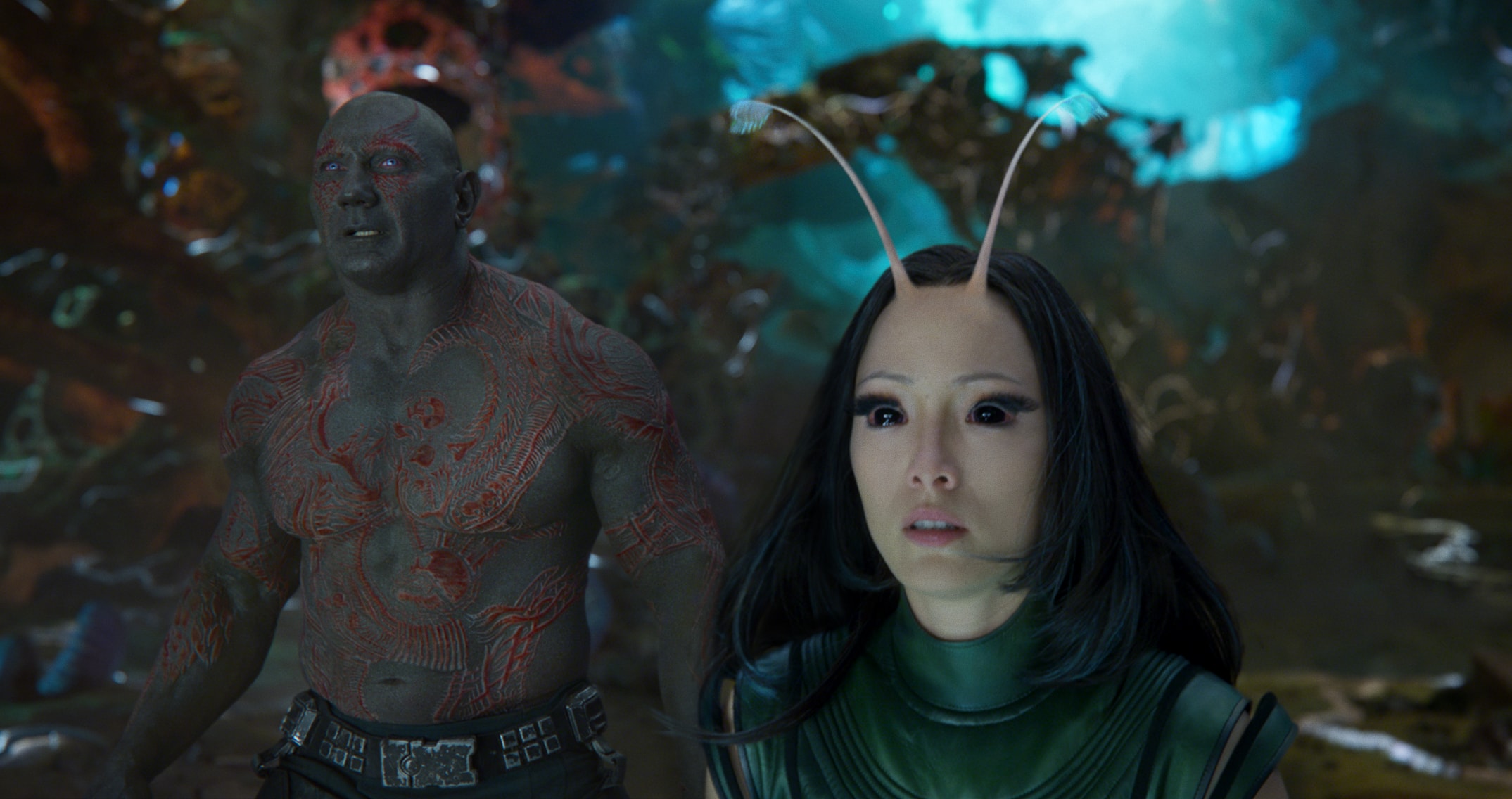 Elizabeth:    I think I’ve got it the easiest because I just sort of sit there and someone paints me. It’s kind of sticky and cold and but I love it. The first day it was a bit overwhelming the whole paint situation.  And then I came to set and I said hi to Zoe, and I said what time did you come to work and she said like three AM.  I had a very civil call of like six AM.  Then I thought I am never ever complaining about makeup ever again.

For me the most time consuming and hectic part of Ayesha is the costume, that gold dress is almost entirely metal.  We used to call it the Ayesha Taco because the whole bottom of the dress is like a great big circular metal thing and they would fold it up like a taco and then I would walk up the stairs. And wherever I get placed, that’s where I am for the day. 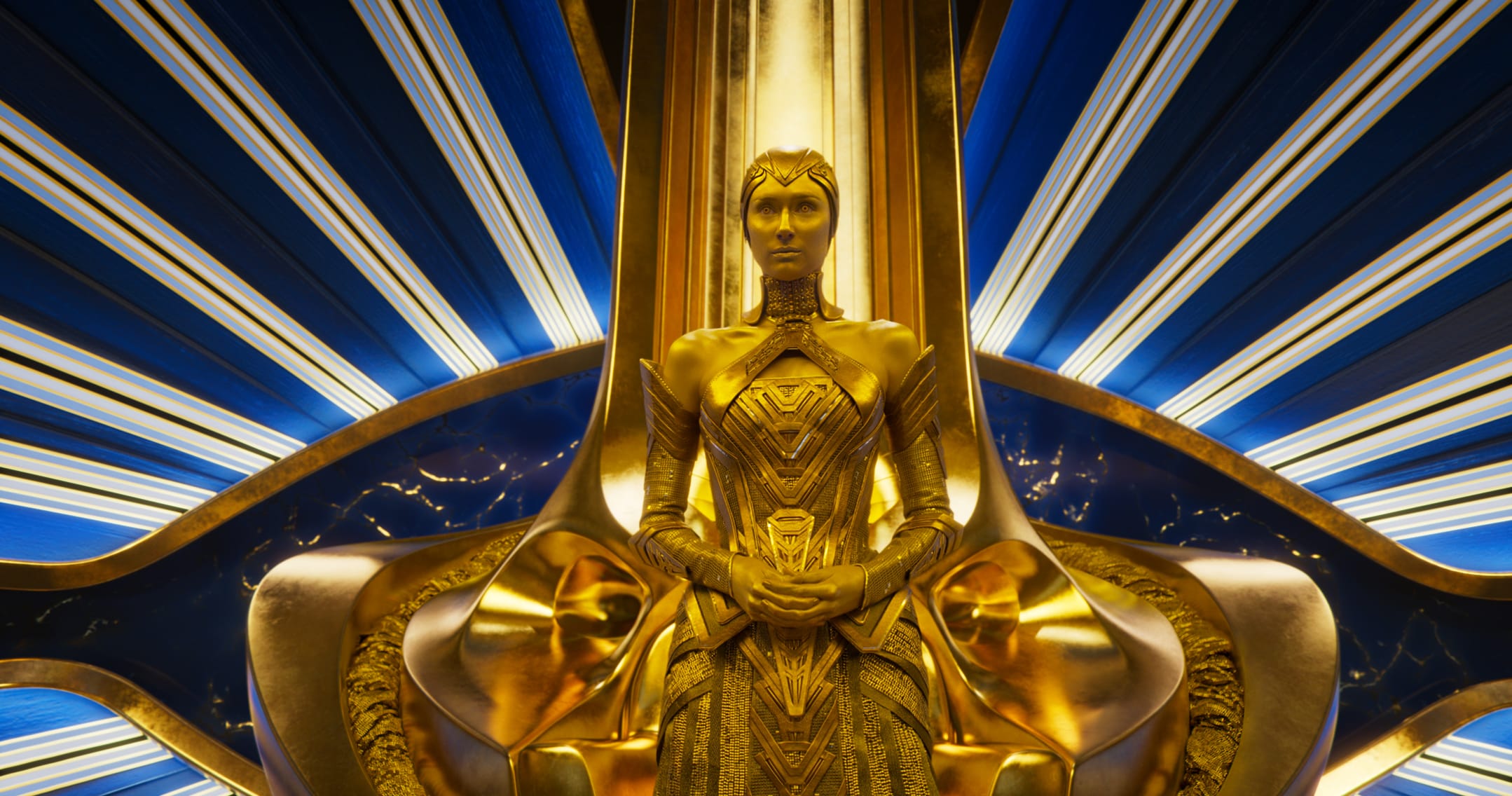 One of my favorite characters in the new movie is Nebula.  I just love her attitude and how she kicks butt all the time. In GotG Vol.2 we get to see another side of her and get a better understanding of why she does the things that she does. We asked Karen if that was important to her, to let people see that there is more to Nebula.

Karen:    In the first movie we saw her and she was this sort of evil super villain watching from the sidelines a little bit, but in this movie we really understand why.  And for me like it’s my job as an actor to sort of be her lawyer and explain to everyone like why she is justified in doing these things. I think we achieve that in the movie, which is really cool. It was just so important to me to give her those layers, because it’s not really interesting to just have a bad guy for no reason. 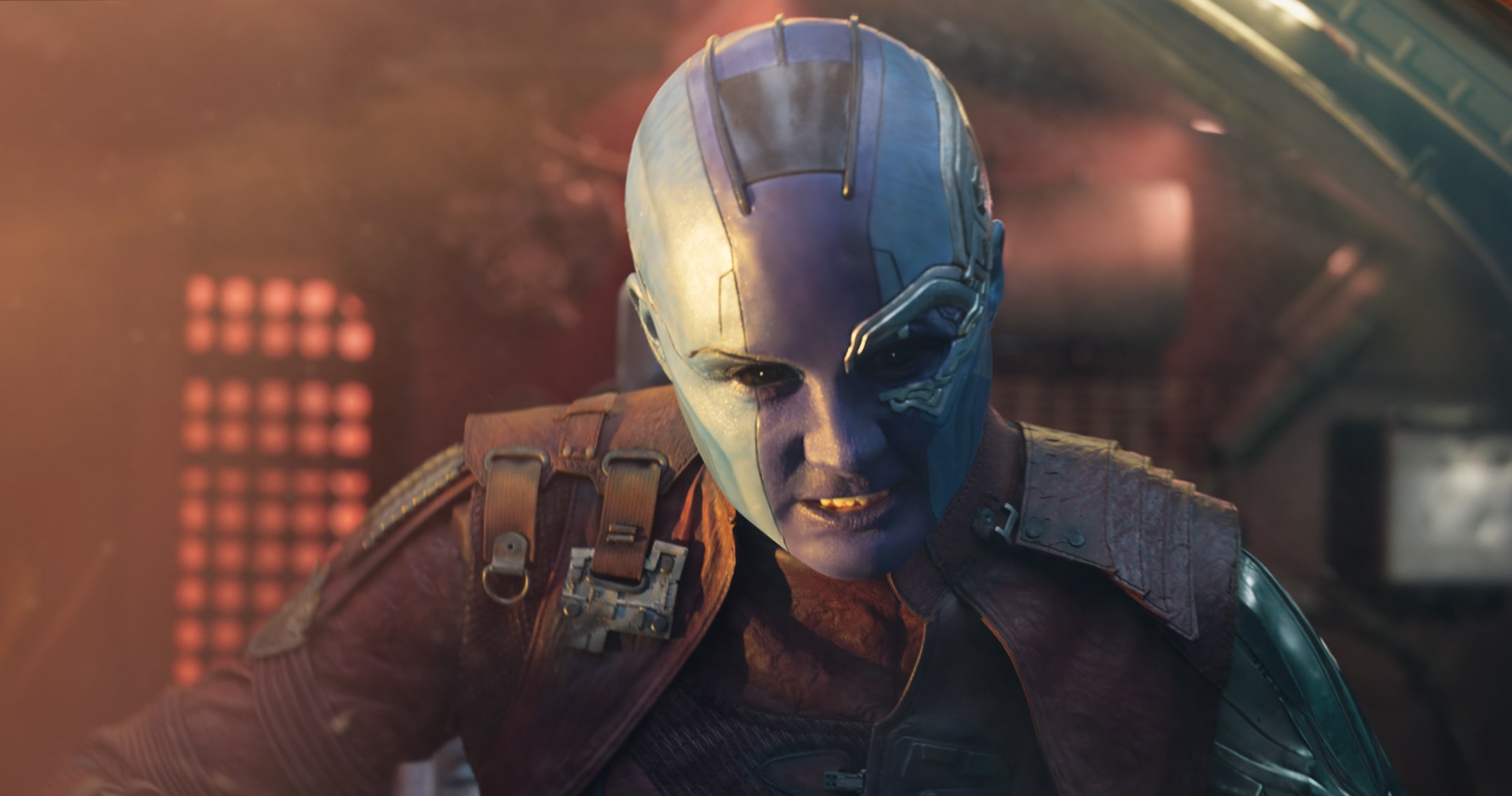 There was a rather large Nebula Gamora fight scene in the movie, we asked Karen about it and what it was like to act in a scene like that.

Karen :    That was amazing fun actually and I’m not the best fighter in the world, I kind of looked like spaghetti and Zoe was amazing, she was just giving me all these pointers, and she was like if you turn your head like this and strangle like this, then you’re going to look really cool and I was like yeah!   so It was great, I mean so it was great, I really enjoyed it, I did a version of all the stunts and then an amazing stunt double came in and made me look cooler and it was cool because it was emotional as well, it was physical and emotional this battle between the two sisters and it was just really interesting to me.

We also wanted to know what Karen thought about Nebula’s future.

Karen: I feel like she has one clear agenda, which is to kill Thanos I really hope that she is the one that gets to do that so I’m crossing my fingers for that would be like therapeutic. That would be cool. I’d like to see her relationship with Gamora maybe get a little healthier, however not so healthy that they don’t still try to kill each other because that’s so much fun. I want her to be bad but like a little bit good.

In Vol.2 we are introduced to another new character, Mantis. Mantis plays an important role in the movie, but I am not about to spoil any of it for you.  She is a very complex character and develops a friendship with Drax that is hilarious.  I found her character very interested.  We asked Pom about how she got ready to play the role and what influenced her.

Pom: I think it’s just about listening and being in the moment and just have fun.  We talked with James about the character and I brought my touch and my maybe what I lived in my past and how and some weirdness and I had fun with it. Because it’s not like it’s a biopic, it’s a character an alien who’s bug like. I mean it’s a crazy world around her and you can invent whatever you want.  So I just wanted her to be like an insect kind of like her position is like this and she’s kind of like nervous so she kind of like cleans her hands like a preying mantis, like Mr. Burns in The Simpsons… I don’t know I had fun with it.  Sometimes I’d be like tilting my head like a dog, when they’re like asking a question. 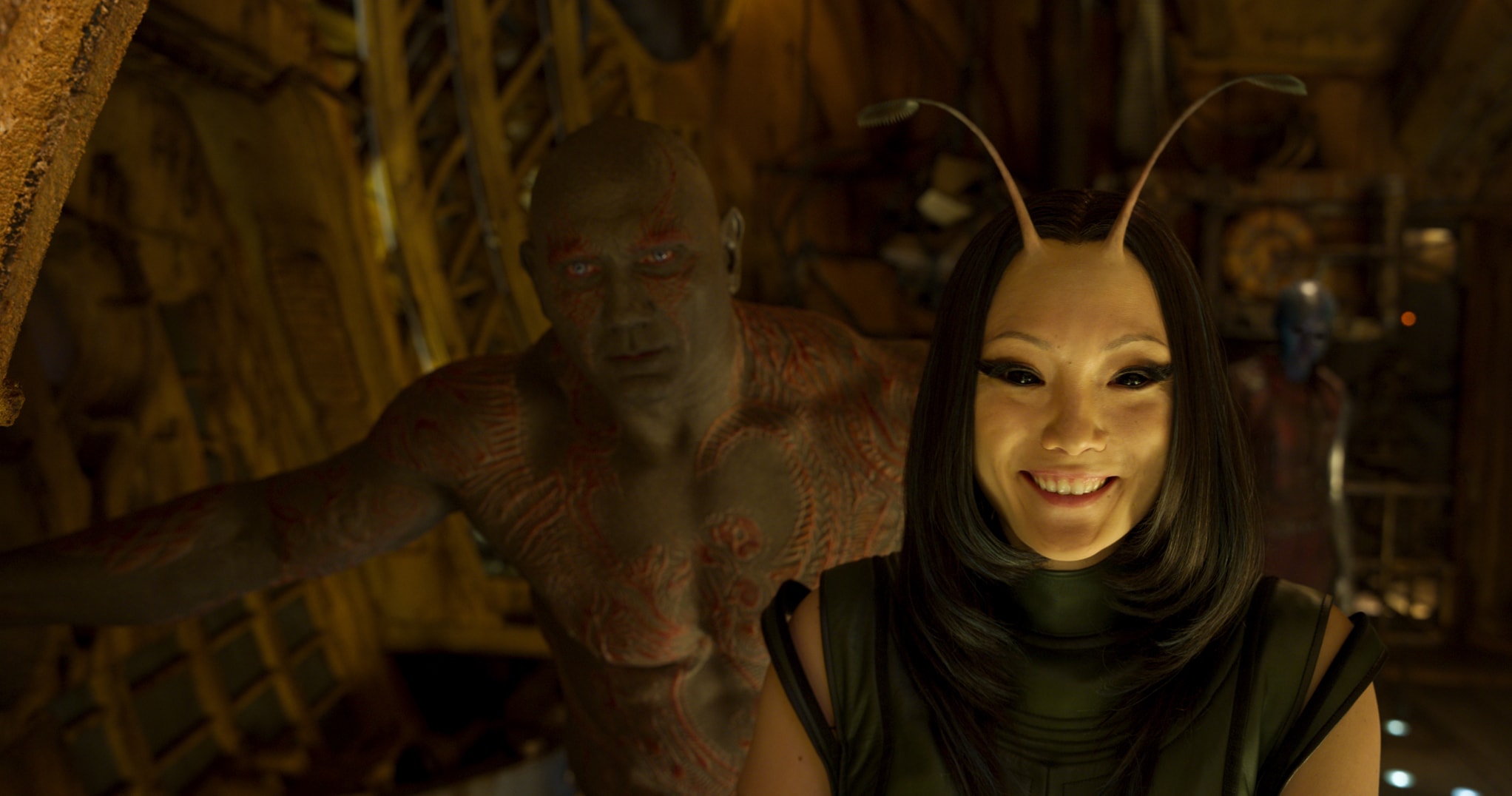 Seeing as these three actors are playing the roles of very strong women, we asked them if there is something that they want young girls to take away from their roles in the movie.

Pom:    That it’s okay to be imperfect and yeah to not be like any everyone else- to be just maybe weird sometimes and it’s you.  And that’s what makes you interesting.

Elizabeth:    Well for Ayesha- don’t be like Ayesha [LAUGHTER] someone said on the carpet, and what similarities are between you and Ayesha I’m like none, I really hope none… I think the thing about Ayesha is she is very justified in what she’s doing.  I think  she’s very strong.  I suppose her moral compass is slightly askew and she’s slightly merciless.  Maybe her strength and I suppose what I like about her is that she isn’t perfect, she’s actually quite fallible.  The irony is they’re genetically modified to be perfect and she’s extremely imperfect, so I guess I would say you could look at Ayesha and then decide to be compassionate. 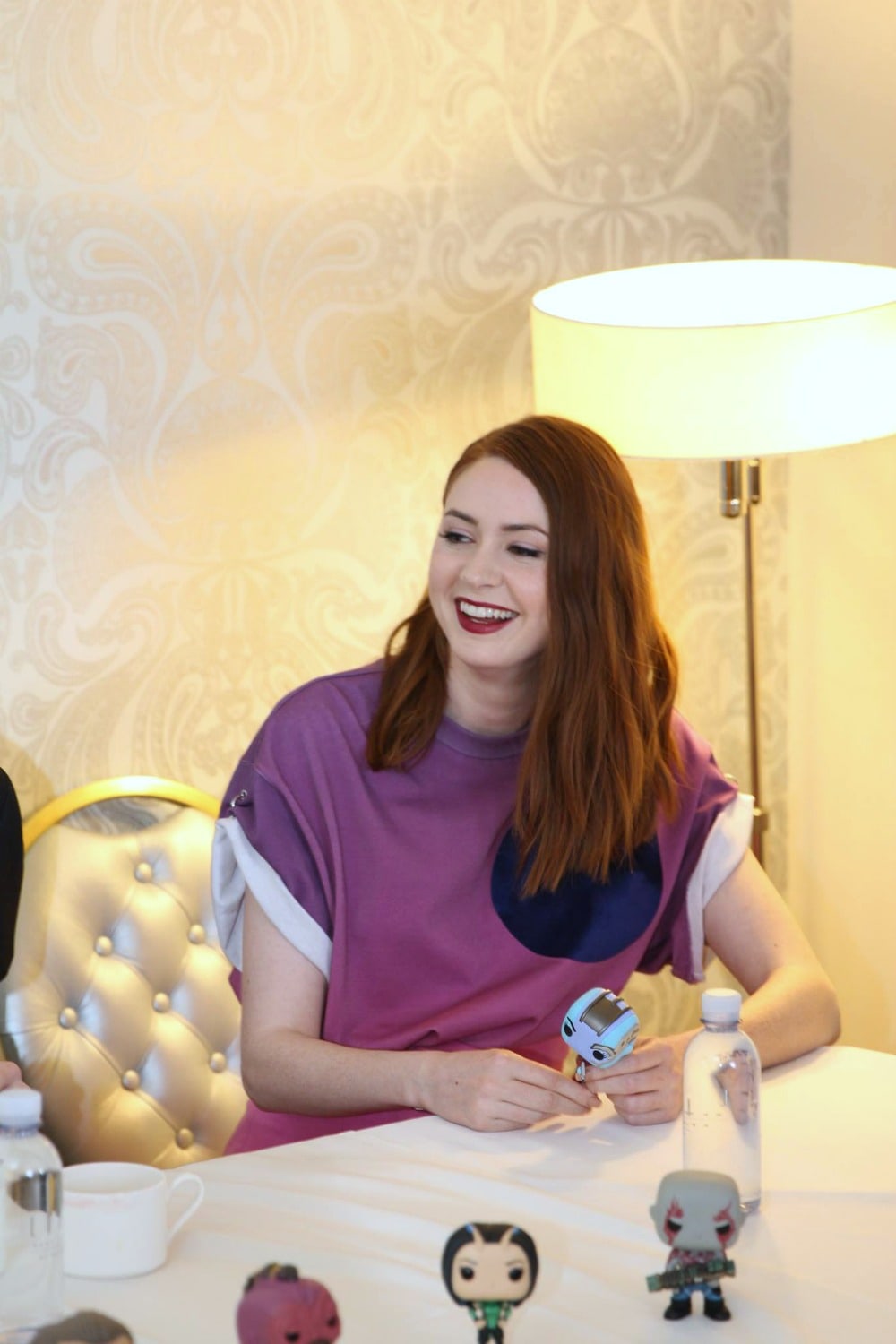 Being a part of the Marvel Universe

The Marvel Universe has a very loyal following of fans who are very emotionally invested in the franchise. We asked about what it has been like being a part of it all.

Karen:    It’s such a cool sensation actually to be part of something that people actually care about because that’s not always the case, usually you’re trying so hard to just make people care about your project.  But with things like Dr. Who and this, I mean it just has like this built in fan base and they’re just so accepting and they’re so passionate, they just like they care about all the decisions you make and you just feel like really special for a second.

Elizabeth:    It- it’s actually a huge privilege as an actor, like Karen said, to be a part of something that people really want to see and that they care so deeply about.   I suppose the first interaction I had with it was at Comic-Con last year… t’s all ages and there’s so many people,  they’re so- it’s sort of like pure joy that just shoots out and it’s incredible.  I found it very overwhelming and I sort of kept getting very emotional in interviews like just after, because it’s rare in life to be a part of something that people love so much and they care so much about.  And there is for me anyway –

Strangely enough I wasn’t really nervous about watching the film or being there last night, usually I get very nervous.  But I just have the sense that- I’d seen it already and I think it’s wonderful.  But I just sort of knew that it was going to be accepted with such love.  And I had hoped that we would be too.  Because we’re new to it.  But yeah if that explains how I feel about it.

I can’t wait for you to see these fierce girls in action, the wait is almost over!

I will be back the rest of this week and next with exclusive interviews and behind the scene coverage from the cast and crew of Guardians of the Galaxy Vol.2. Be sure to check back.