Home » My Interview with Julie Bowen the Voice of Dipper from Planes: Fire and Rescue 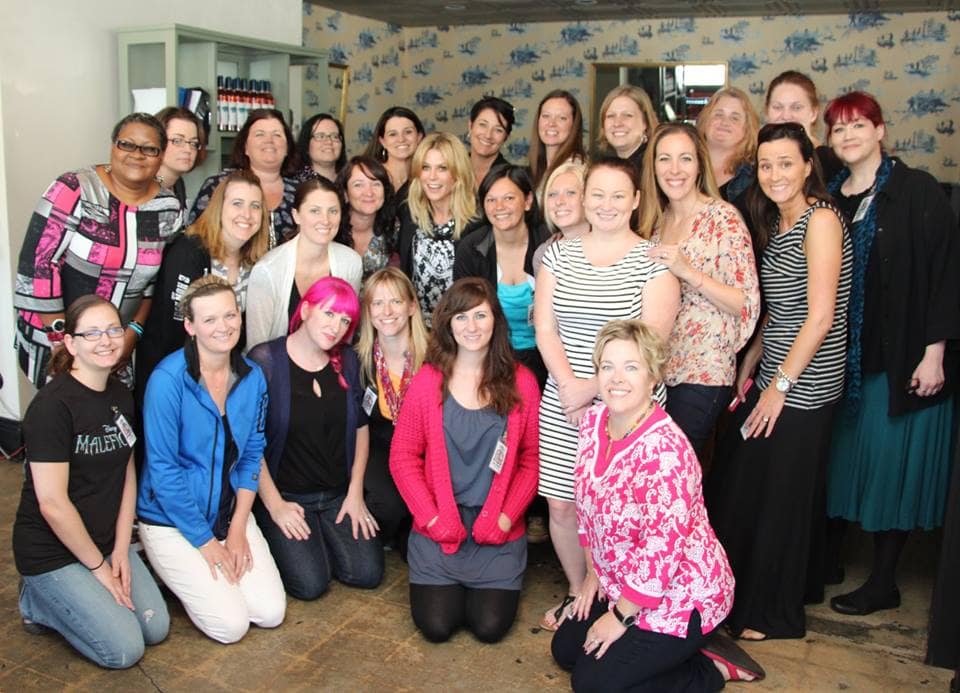 I have done a few celebrity interviews in my time in the media and I can tell you hands down that my interview with Julie Bowen was probably the most fun I have had interviewing someone.  Julie Bowen is full of energy.  In fact, she is about as enthusiastic as the character she plays in the new Disney animated movie coming out this month Planes: Fire and Rescue! 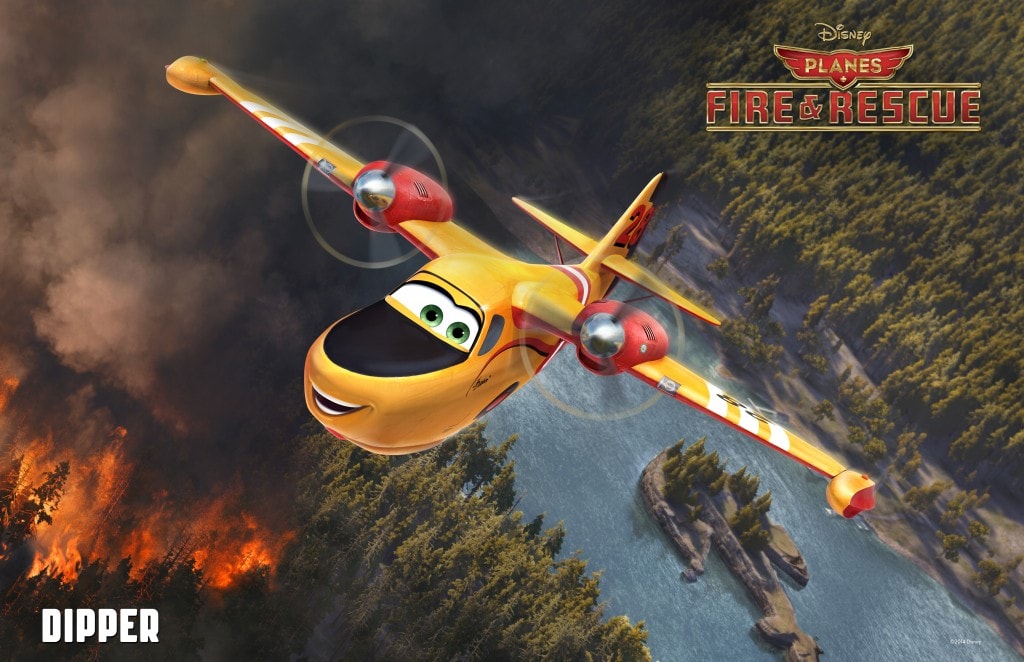 A group of bloggers, including myself, had the amazing opportunity to sit down with Julie in May to talk about her role as Dipper, a fire-fighting plane that has a slight fan obsession with Dusty.  Her character is a little fanatic and high strung, but she is all business when it comes to doing her job.

Is this your first time playing an animated character?

For a movie, yes.  I did like a couple little quickie things like Scooby-Doo (so my kids could see me).  My kids don’t watch Modern Family.  The world is about them.  And according to my therapist, that’s totally normal, for awhile.  So I’m like really?  Everything is about them! They don’t want to see me on a screen that much.  But they like the voice thing.  So when I got an opportunity to do this, I saw how much mileage I got off Scooby-Doo.  I couldn’t believe how much mileage I got from them.  They were like worshipping me.  So this, like I mean I’m genuinely excited to show off to my children.

How was it to do animated versus Modern Family?

So different.  So different.  I am not a trained voice actor.  I’m keenly aware of my weaknesses and that may be because there’s something that obscure or high, there’s no like,  “I think we might have seen your boob there.”  You know what I mean?  It’s just your voice, and if you aren’t getting across clearly, the humor, the message, the- the real sentiment, you can’t deny it.  You can’t go like, yeah, but she looks really big in that shot. Or your hair looks nice, so maybe no one will notice.  So, I was keenly aware of it.  Luckily they are perfectionists and they are so pro that they very quickly figured out that the best way to work with me was just let me go.  And then some poor editor had to sit somewhere going, oh my god.  I mean I was leaping around, swearing.  The original Dipper had quite a mouth on her.  But to get to the like sassiness of the way that she thinks, I kind of needed to spout some garbage. 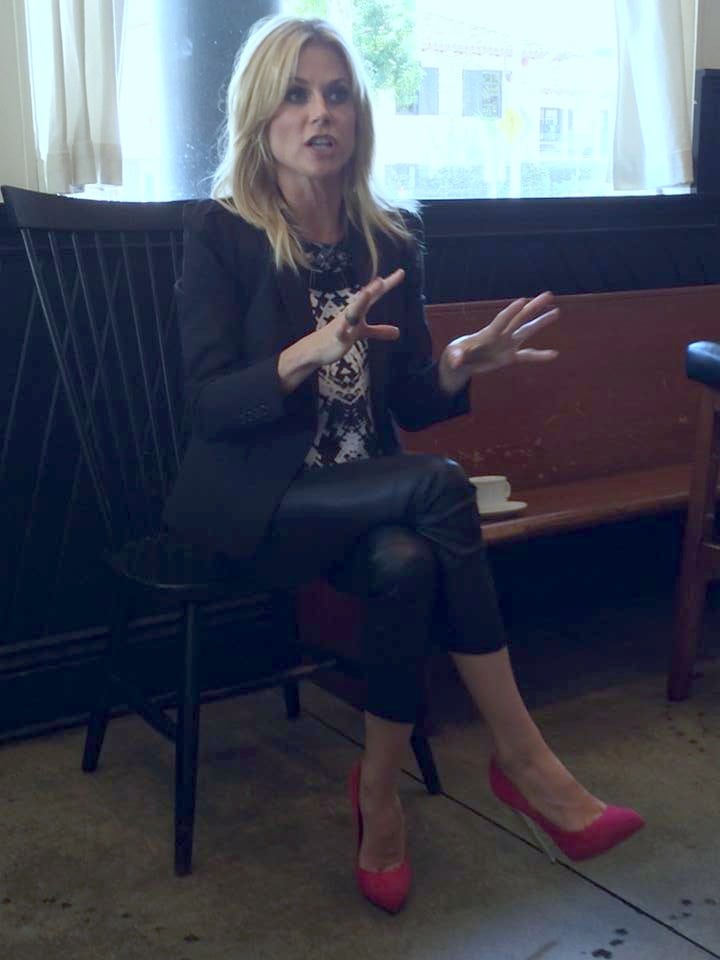 Do you watch the film first and then voice it?

They draw- it- it’s kind of like what you would imagine as far as there’s a rough sketch copy.  Like pencil drawing and then sometimes it’s more than that.  It’s the pencil drawing against the backdrop because I guess the backdrops are more static. But what I see is just mostly some loose drawings in the very beginning. Then I come back like six months later and they’re drawn more.  And the cool thing is, six months or eight months later, they’ve taken all that spouting that I did in the booth, and running around and sweating, and they incorporate it into the character.  And now they’ve started to draw her movement and her mouth and everything to fit that.  And that was very cool to see.  Somebody had to work very hard.

Are you ever with other actors in the booth or always by yourself?

No.  I was always by myself.  When I did Scooby-Doo it was in a room with a bunch of people.  But those are serialized.  You know, it’s weekly or however they do it.  So they’ve got a much faster production piece.  I don’t think you can afford to bring one person in at a time.  No, I was completely alone.  But luckily,  Dane Cook, I mean all theirs was done.  It was completely done.  So I could hear him, I could hear Ed Harris, I could hear all- everybody else.

At the end of the day did you walk away feeling different?

You know, I think when I actually get to see the whole movie it’s gonna be really exciting.  I’m not very good at watching myself, but I’m okay at listening to myself.  Like I’m very excited about this.  It also feels so collaborative, it doesn’t feel like I’m raising the ‘I am awesome’ flag, which always makes me cringe a little.  I can look at this and go, wow, I was part of something that was so awesome so it’s easy when you’re done to embrace the whole thing.

About Getting Herself into Character

I mainly needed to leap around.  Which was great, because you can’t do that on camera.  I actually took my shoes off and would definitely do a lot of jumping around.  It’s funny, because Ty Burrell, who just came off of two big animated films back to back,  needs to sit in a chair – I don’t think he’ll mind me telling this.  But he sits like this and has the microphone here and and hands like this, and doesn’t move. And it works for him.  He gets everything he wants comes through his voice.  And I kinda can’t.  I can’t.  Which is just different.  I can’t even sit still right now. I would run around and like scream and yell, and then do whatever it is I needed to do.  Especially in scenes where we’re flying over fires and we’re putting them out and you’re like yelling. And it’s weird when you’re alone in a quiet room in a beautiful building.  Like Quaker made walls or whatever.  It’s ridiculous.  Would you like a bucket of nuts?  Did you see the food over there?  That’s amazing.  It’s incredible.

Julie is a very fun person to hang out with. She was genuine and loved to talk with us about our kids.  I enjoyed our conversation and her part in the movie.  In fact, I got the chance to play her in a short voice-over at Disney Toon Studios.  Check it out!

Be sure to follow Disney’s PLANES FIRE AND RESCUE on Facebook and  Twitter as well as the website: www.disney.com/Planes and if you want to learn more about how the characters came to life, read my last post: The Art of the Story and for more about the research read Do Your Research.