I have been a huge musical theatre fan my entire life.  I sang in the choir and performed as a member of the Jury in my first musical, “The Three Little Pigs,” when I was in ninth grade.  Since then, I have seen more musicals that I can count, and I have grown to admire the actresses and actors that have the amazing talent to perform them. With roots deep in musical theatre, Into the Woods director Rob Marshall and “Cinderella” Anna Kendrick talked with 25 mom bloggers earlier this month about what it was like recreating  Stephen Sondheim’s musical for the big screen and playing the part of a very different kind of Cinderella. 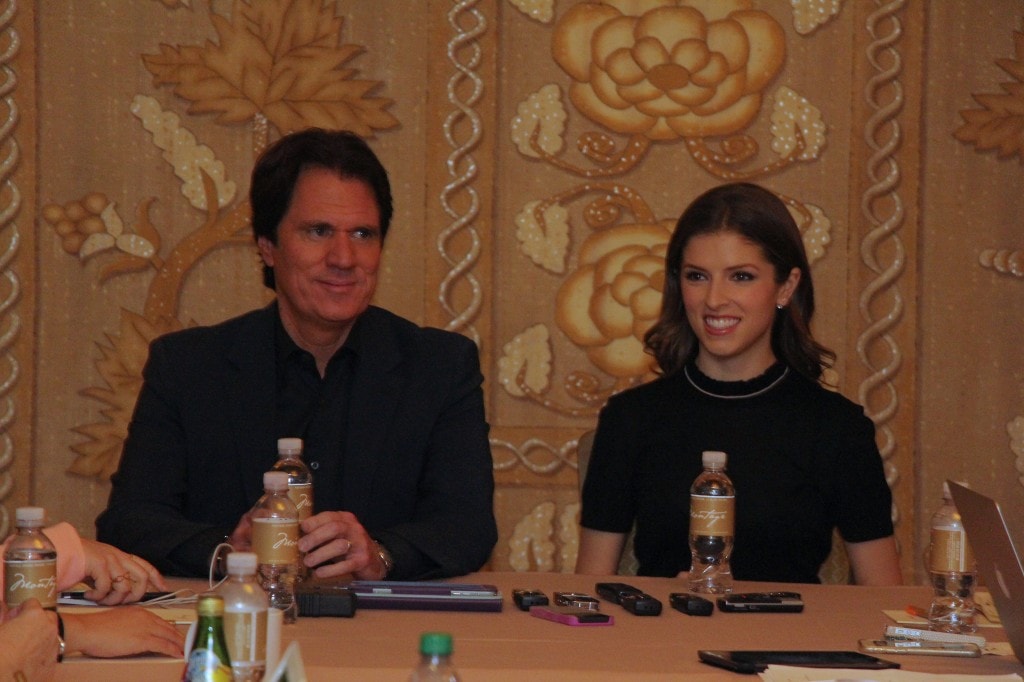 Rob talks about, in an earlier interview, how the cast was such a surprise to him in relation to their talents. We asked what  surprised him the most about Anna Kendrick?

Anna:    I’m so embarrassed. I should leave the room.

Rob:    It’s easy to talk about Anna ‘cause I adore her. The truth is, that voice is extraordinary and I think everybody looked up to her in the cast because of that.  She comes from that in a very rich background with her Broadway experience as a child. So to have that gift is amazing. What surprised me the most about Anna is her range as an actor.  The fact that she was able to open up and show such depth and vulnerability and agility and complexity. Meryl Streep called her role the most complex character in the film because of what she’s dealing with and she’s right.   It needs a great internal depth.  Anna’s an Oscar nominated actor who’s done enormous amount of beautiful work on film and on stage but to see the full range of what she has and to be able to open that up, it’s an exposing thing as an actor, to be able to let you in and Anna lets you in this movie. She lets you into this person who’s indecisive and not sure and wrestling with what she’s feeling. It’s a very brave personal, beautiful performance and I’m very proud of it. Very proud of her. 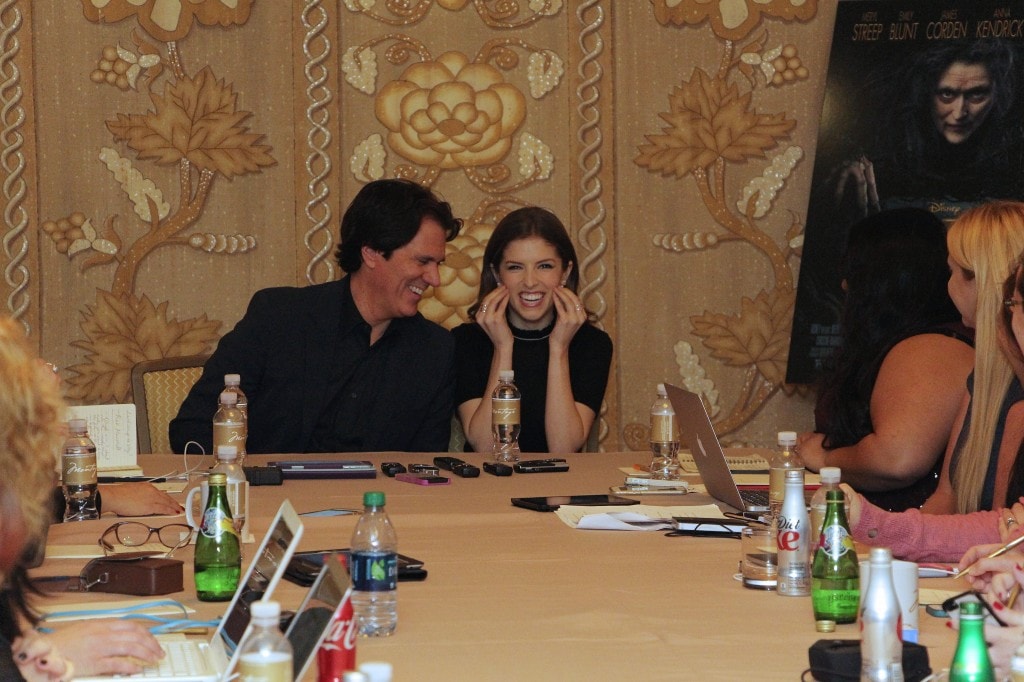 Rob called this cast a company. We asked what defines a company and what made this cast that definition:

Rob :    A company is everyone working together. I mean it’s as simple as that. That’s what it is. Everybody working together for the same thing. When I cast people I not only cast them for the talent and for playing the roles but I also cast them for who they are.   There was a sense of honoring this beautiful piece. We’re all very lucky. Musicals are few and far between anyway. A Sondheim musical is really few and far between so we felt very lucky to be doing that.  I felt everybody supporting each other, rehearsals helped enormously.  I think during that time , wouldn’t you say Anna, that during the rehearsal was a bonding experience for people?

Anna :    It was an equalizer ‘cause we were all terrified and there’s nothing like terror to make you forget what you thought the hierarchy was going to be when you arrived, especially when we were all so intimidated by the music. It just made you realize we’re all in the same boat here. 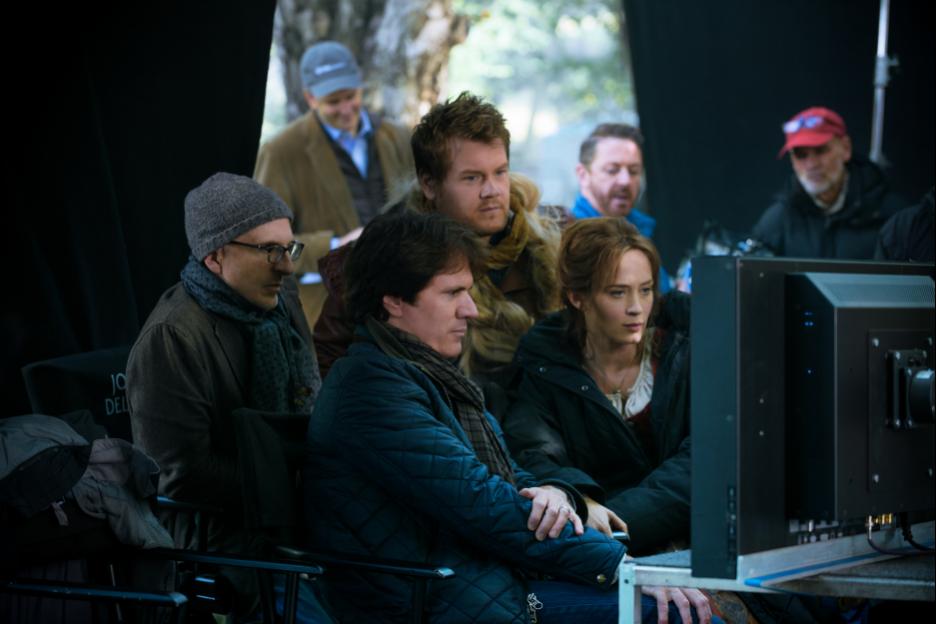 How much time of rehearsal did you guys have before actually shooting?

Rob :    It’s interesting. We had four weeks of rehearsal and then two weeks of prerecords but continued to rehearse while we were prerecording so we kind of I guess all together, had sort of six weeks before we started really filming. 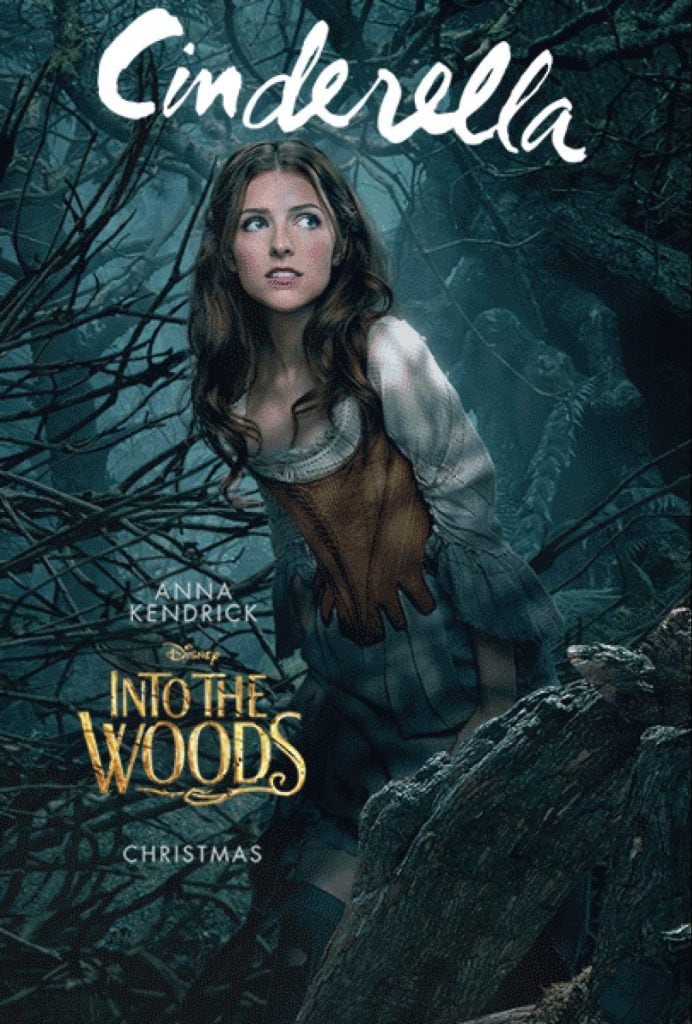 Every girl dreams of playing Cinderella. How did it feel playing a different kind of Cinderella, almost like a modern day Cinderella in a way? What’s the thought process?

Anna :    It’s funny because I think a lot of girls’ dream of playing Cinderella and a certain kind of girl dreams of playing Sondheim Cinderella.  I’m glad that some people are surprised by her but, it is a Cinderella that has existed since about 1987, so I didn’t have that sense of responsibility or anything about it. I think that something that we do to ourselves as women, especially modern women, we instead of trusting our instincts.  I think we have a tendency to feel a responsibility to weigh every option and look at things from every angle and ask our mom and ask our sister and ask our friends. We find ourselves in situations or committing to certain things that our gut is telling us is not gonna make us happy or is gonna be harder in the long run. It was kind of really fun to play that she’s talking herself into things and out of things. I think that by the end of it for her to really realize what’s really important to the community then it becomes pretty easy to say goodbye to this guy who’s sort of a tool. 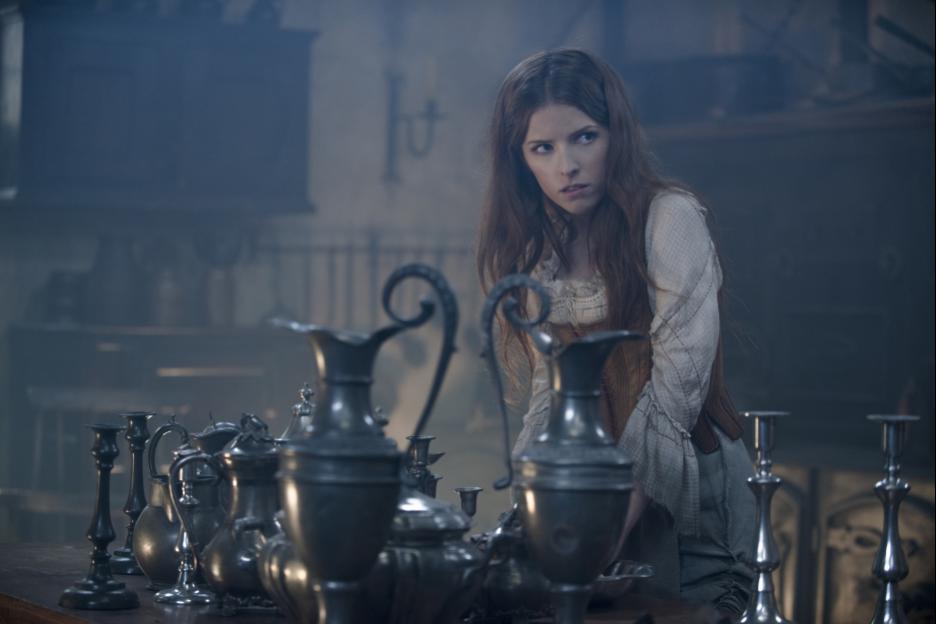 You’ve done a really good job at creating a large fan base and I was wondering if there’s anything in particular that you do to keep them engaged or anything specific?

Anna :   I think that when I first started working consistently and doing press I felt like I was supposed to be a kind of really composed, very diplomatic version of myself.  I remember Rob said something to me when we were doing press about Twitter or talk shows or something and he said it’s so great that you can be yourself.  I was like it is great that I can be myself because not being myself was a lot harder. I’m really, really grateful and I feel seriously lucky that I’m able to do that. It wasn’t like I just decided one day I’m just gonna be myself and people will like that better. It was sort of a tentative process and I feel really lucky that people have embraced my sense of humor and honesty.   I assumed that I was gonna have to be sort of Miss America my whole life and it’s a relief that I don’t. 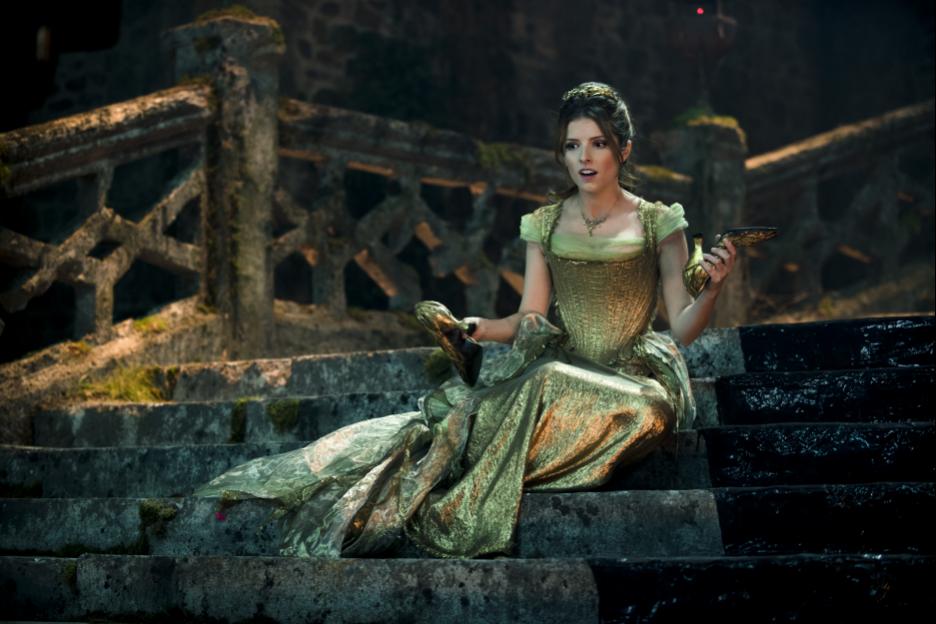 Besides the live audience obviously what is the biggest difference and or challenge, this is for both of you, directing, acting, about doing a musical piece on film versus theatre?

Rob :    When you’re doing a movie musical it’s almost like doing two films at once because you have that huge musical side of it. It’s a big portion of it and it just takes a lot of time to do well. On stage the eight shows a week thing is incredibly tough. On film, the difference is that you have to do it with such specificity and you can’t lie on camera. What’s a beautiful thing about this piece is that it’s really a combination of live and prerecorded. The test for me is it should always feel live. Like when you’re watching it, it should seem like it’s happening in the moment. You shouldn’t know where it’s live and where it’s not.

Anna :    And the microphone doesn’t lie either. People think that if something is pre-recorded that means that you got to cheat a lot but the microphone hears everything. I was amazed when we would hear playback.  I thought I was doing the same thing take after take and there would be so many different colors… It catches everything the way that the camera does.

Rob:  Someone asked me, so did you enhance these performances in any way shape or form? I thought what are you talking about? I mean, no. I don’t even know how to do that. I don’t even know what that is. The joys of the piece is that you feel the character, even the imperfections of the voice. I don’t want perfect voices. I want the emotion and the actor to come out. That’s the most important thing. The fact that they all sing so great is a testament to the incredible work they put into this piece.  They all can really sing, even people that were new to singing for the first time like Chris Pine or Emily Blunt or James Corden. They just worked incredibly hard to make it happen.  Anna’s role as Cinderella is so difficult to sing. She’s belting the last note of her song. I mean what is that an E? 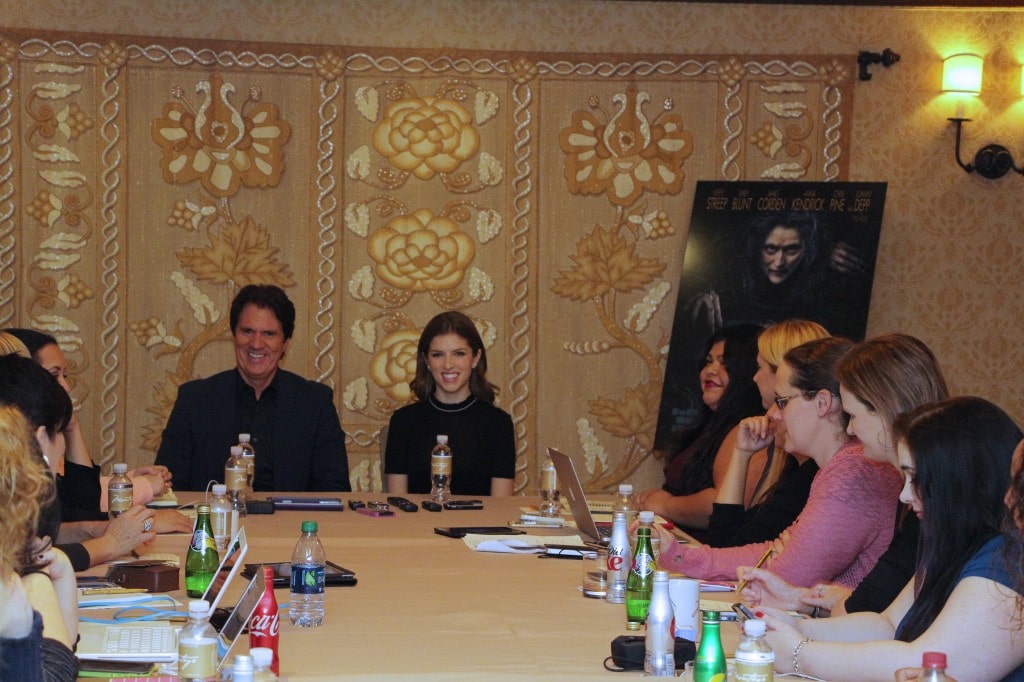 Speaking of the musicals you’ve done Pitch Perfect which really wasn’t a musical and then it is and then your next film is a musical and you’re kind of bringing it into a whole new generation.  What is it about musicals in general that, you know, why are you doing them?

Anna :    I mean I’m doing musicals ‘cause they’re making musicals. It’s a grand time to be alive and working. I, I’m so grateful that Rob ushered in an age when people would make a movie musical.  It’s not the plan to make them exclusively for the rest of my life but they just mean so much to me.  I love being a part of it while as long as anybody will kind of let me.

Do you think this role changes how little girls will view princesses?

Rob  :    I hope so and I love that girls now seem to be asking for that and embracing that.  To me the idea that we’re seeing a princess who chooses the unknown over security I think is an important message for girls.  I also think that the idea that it’s not as simple as right and wrong and who’s a good guy and who’s a bad guy are a part of our lives all the time. I think it’s a really outdated notion that one person is right and one person is wrong. I hope that Cinderella’s journey in this is a reflection of that and a reflection of forgiveness and compassion. 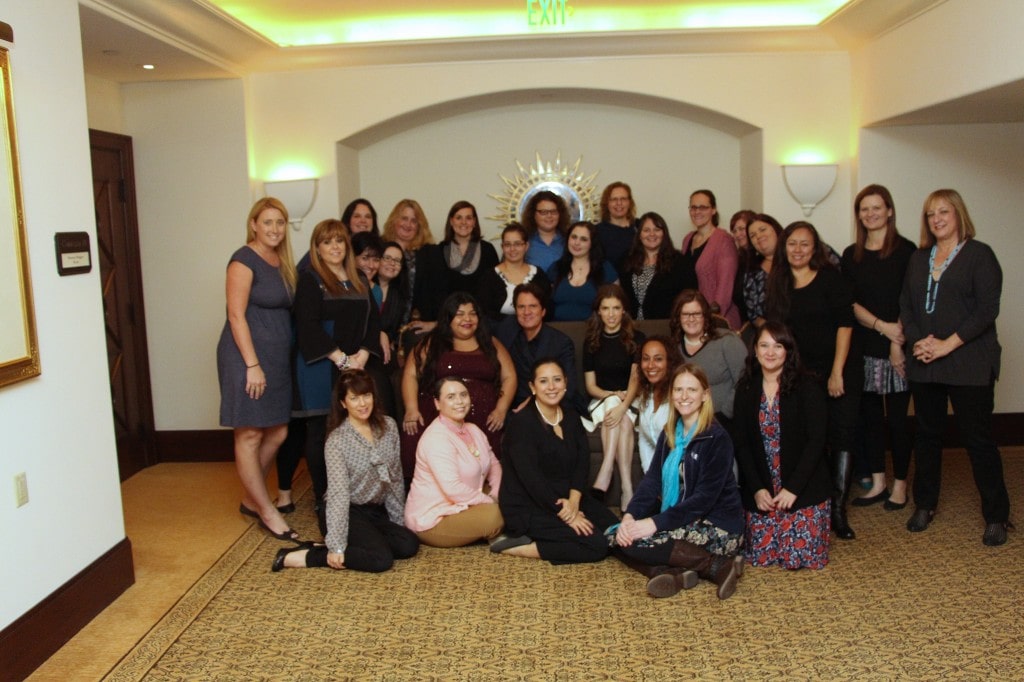 Pictures courtesy of Disney and Louise of MomStart

I am still pinching myself that I was able to sit in on an interview with Rob Marshall and Anna Kendrick. I can’t wait to see what they have in store for us next.  I am a huge fan of Anna’s and will be watching her in whatever she takes on.  It was an honor to talk with the two of them.

For more Into The Woods coverage be sure to read my review of Into the Woods, my interview with Meryl Streep, Tracey Ullman and Christine Baranski, and my hilarious interview with Emily Blunt and James Corden.   Next week I will be brining you our interview with legendary Costume Designer Colleen Atwood!