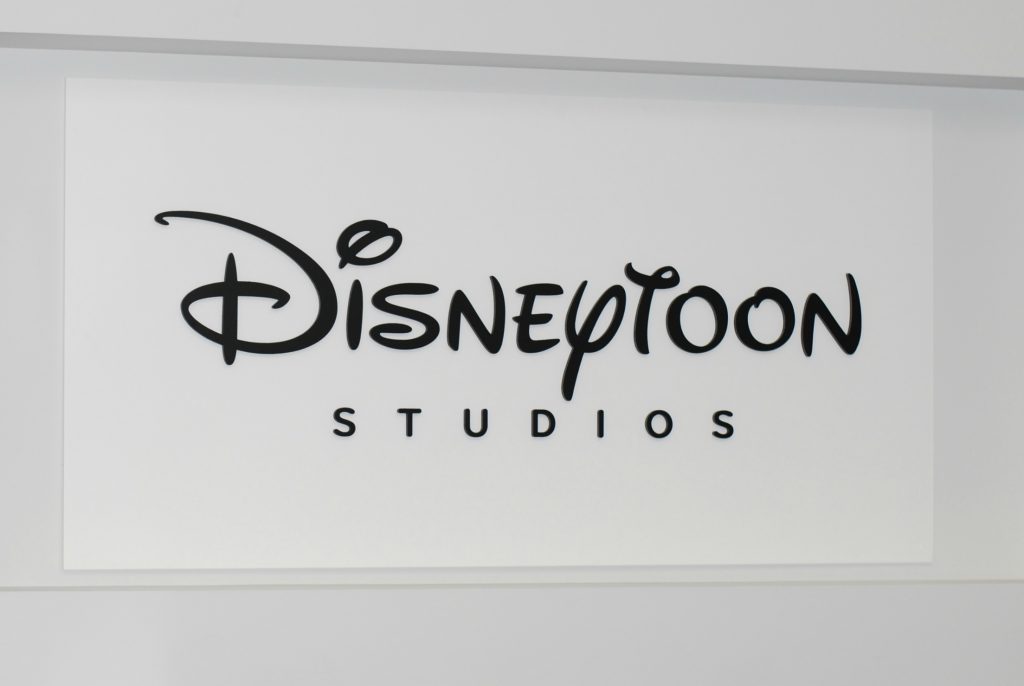 One of the events that I got to attend during the #DisneyMoviesEvent last month was a trip to DisneyToon Studios to watch a screening of The Secret of the Wings.  This was the first time I visited the studios and I was so excited!  While we weren’t allowed to take many photos, I did mange to get a couple of the signage for Tinker Bell and the Secret of the Wings movie. 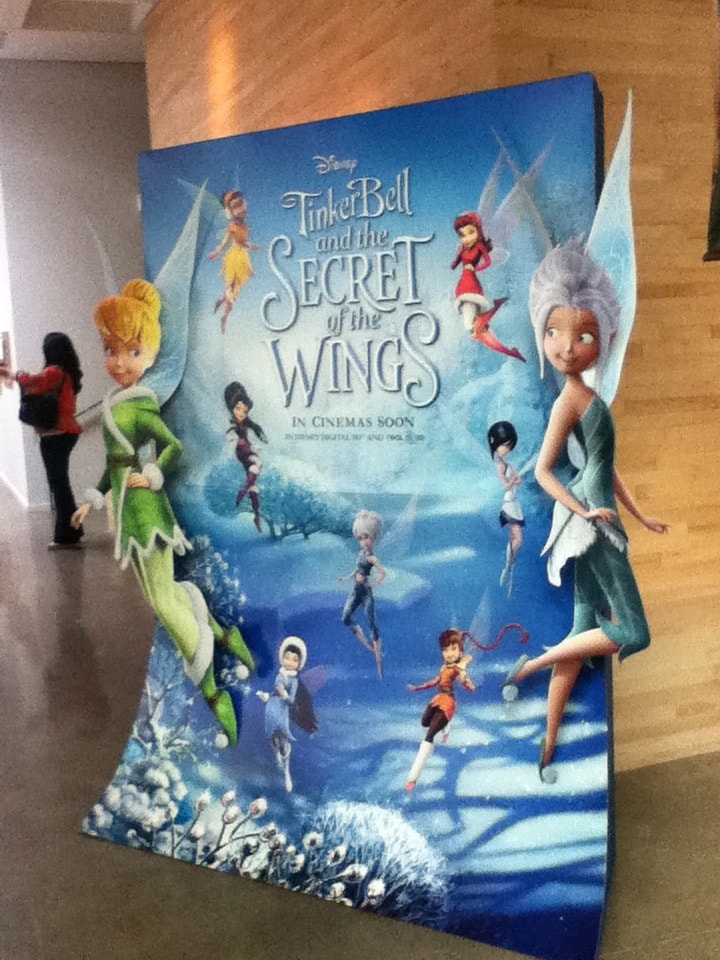 My son and I have seen the trailers for this movie on Disney Junior, and we were both very excited to see it.  I haven’t told him that I got the chance while I was in California.  Guess what?  While we were finishing up our breakfast John Lasseter actually came to see us and thank us for previewing the movie!  Can you believe it? 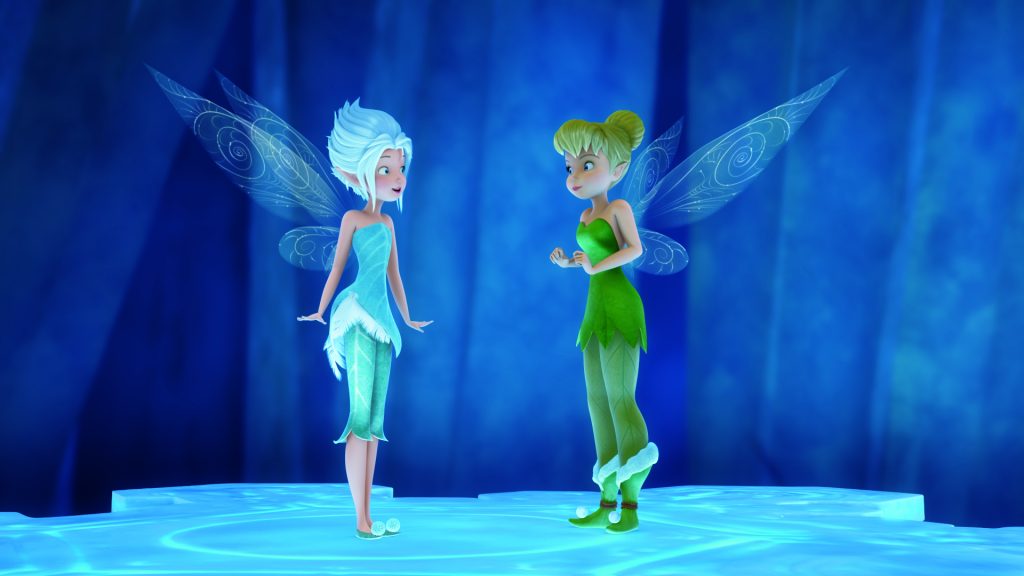 The Secret of the Wings is an adorable story about Tinker Bell and her sister Periwinkle.  Yes, I said her sister.  Periwinkle and Tinker Bell were born of the same laugh, but Periwinkle traveled to the Winter Woods where she grew up.  They find each other but are forbidden to be with each other because winter fairies need to be cold and Tink can not be cold or her wings will break.  Of course, they figure out a way and try to learn as much as they can about each other. 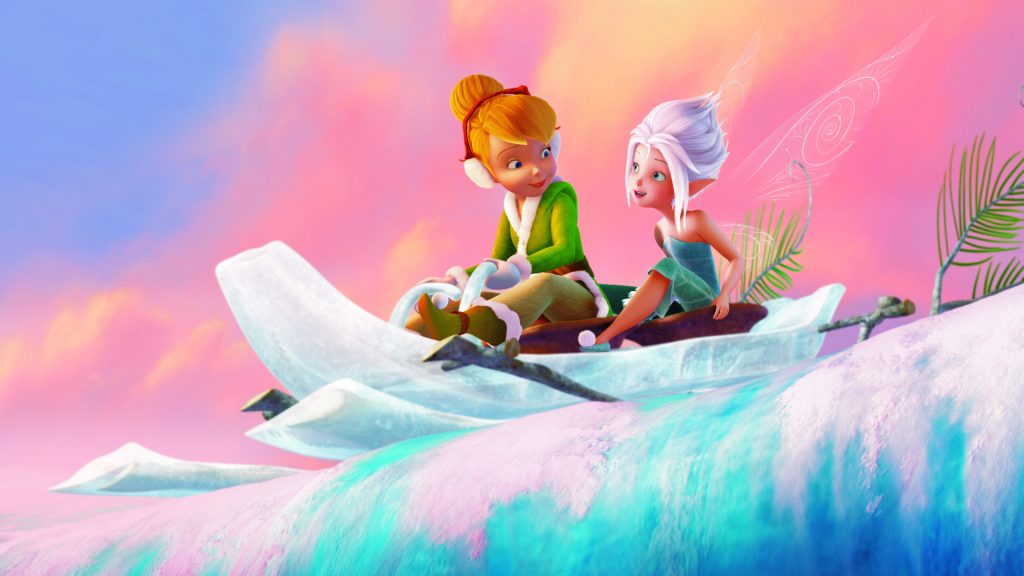 Unfortunately, they get caught by Lord Milori and Tink has to return to the forest.  I don’t want to ruin the movie for you, so I will just tell you that an adventure ensues and Tink has to find a way to save the day!

I loved the movie.  If you have a sister, this would be a fun movie to watch together.  There is a special bond between sisters that the movie captures in a sweet way.  I love the new winter world and the addition of the winter fairies.  I watched it in 3D and the images were captivating and beautiful.  The 3D added to the movie instead of being distracting.  It was almost like I was a part of the fairy world.  I thought that this movie would be very girlie, but I was pleasantly surprised that it would appeal to boys as well as girls.  I know that my son is going to love it! 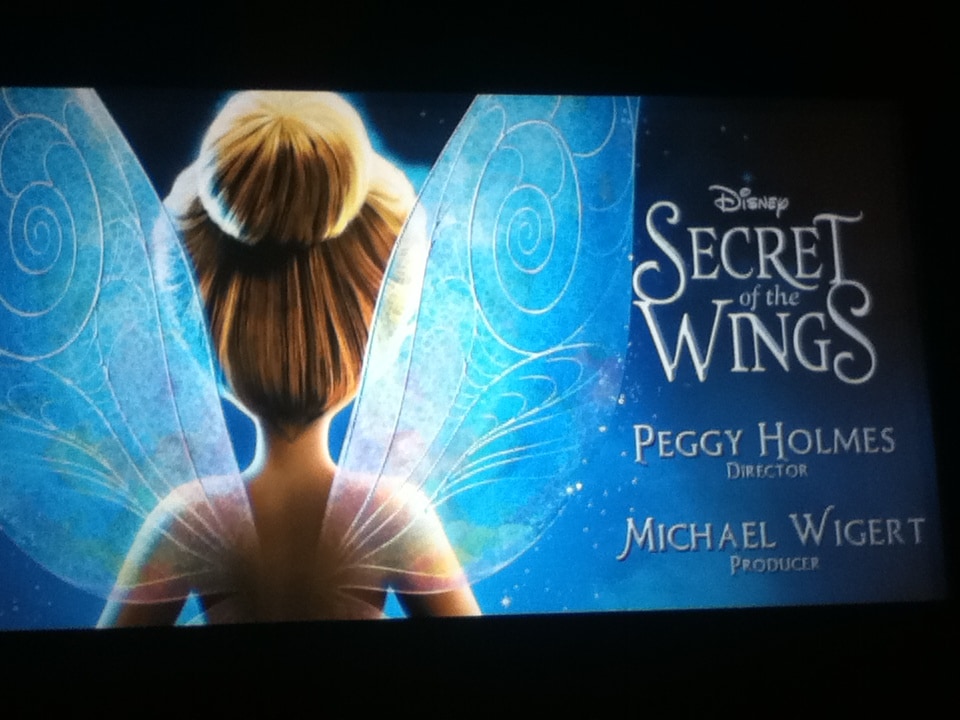 After we screened the movie, we got the chance to meet and interview Director Peggy Holmes.  I loved talking with her and seeing her enthusiasm about the movie.  Here are some of the questions we asked;

Can you tell us how you picked the names?

That’s a good one. As looked at photography of winter  I noticed there were so many awesome looking whites and blues. And one of the things we wanted to focus on in the movie is that this can’t feel like a Christmas place, it’s not a season winter. In this particular movie it’s a place. It’s a place they live, it’s there all the time. So, we needed to sort of create this magical winter and the images I was drawn to were all the whites and the blues. So, we decided to research all the different shades of blue and find the names out of that. So Periwinkle became Periwinkle and  Milori, Lord Milori, Milori is a shade of blue! If you didn’t know that. So that’s where that came from. 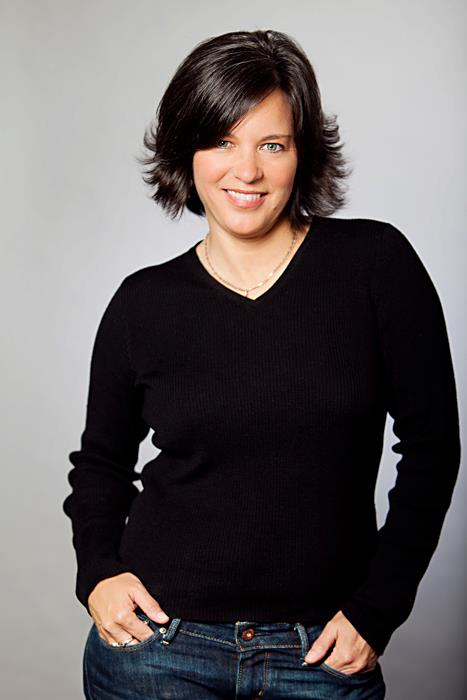 Tell me a little bit about the process of introducing Tinker Bell’s sister, since we’ve all known about Tinker Bell, she’s the iconic character.

I talked to you in the beginning about wanting to tell a story about bringing two worlds together. When we originally created Periwinkle it was not Tink’s sister. When I was in the first day of kindergarten or the first day at a job, there’s always someone you gravitate toward and you don’t know why yet. Then as you get to be better friends you realize why. They complete your life in a way that maybe another kid doesn’t complete your life. So originally that is how we developed the story and it just wasn’t having as much emotional impact.

So Clay Hall who directed Lost Treasure actually said why don’t we just make it her sister. And we were all like oh, you know- because that’s a universal idea that it’s your very right to know your sister. Then we started the process of what does that mean in this world. That was a fun creative process and we came upon this idea that oh my gosh there were two little wisps and we just didn’t see it in the first movie.

That is how kind of the process worked creatively and it was a really fun challenge and not easy I must say. I have three sisters so I understand that bond that happens between sisters. That sort of unspoken thing. That you just look at each other and you know. You don’t have to talk about I would go to the end of the earth for you. You don’t even have to like say it. You know? You can- you just do it.

I wanted to put that feeling in there. Then in the future, what we’re doing with Tinker Bell is continually showing you different sides of Tinker Bell’s character.  I think of Tinker Bell as someone who is so loyal. We saw it in Peter Pan the first time we met her. She is a super loyal girl. For me, a loyal person has a huge heart. This was an opportunity to step into Tinker Bell’s heart a little bit and show how emotional she really is.

We know she gets red-faced. There’s the other side of that which is deep love. That’s what I wanted us to bring out and-in terms of the future.  We will continue to tell Tinker Bell’s stories. And if it makes sense for Periwinkle to be in that adventure with Tinker Bell she will be there. Periwinkle is at the parks which is really thrilling.

So what is next for Tinker Bell?

You know all those doors that say no production, no crew past here? (Laughter)  There are several stories in development for Tinker Bell. It’s really exciting and fun and, you know, it’s a director driven process. So-so every director sort of looks at it a different way and thinks oh what could I tell about her. So that keeps it really fresh and exciting.

As far as the 3D, how do you balance wanting to add the 3D elements in there without making it all about 3D for the people who are watching it in 2D?

That’s a great question. I think in this case  it was exciting to learn about that 3D. We have a stereographer who sort of showed me the scale of 3D. You can go into the screen or you can go out of the screen. I prefer going deep into the screen because for me in this particular world, it made it feel to me like a living diorama. Like I just love—it just makes that world of Pixie Hollow feel that much more real and tangible.

You know the other thing I wanna say about 3D is for me in this particular story especially, I didn’t want to be aware of it. You know? Especially sort of the emotional moments. I didn’t want to feel like the character was separated from the background. That’s a big thing for me. You know in a different style movie, it would be different. But for this movie I just wanted you to be able to be lost in kind of the emotion of the story and never really be aware of it, and only use it for sort of magical moments to enhance the magic. 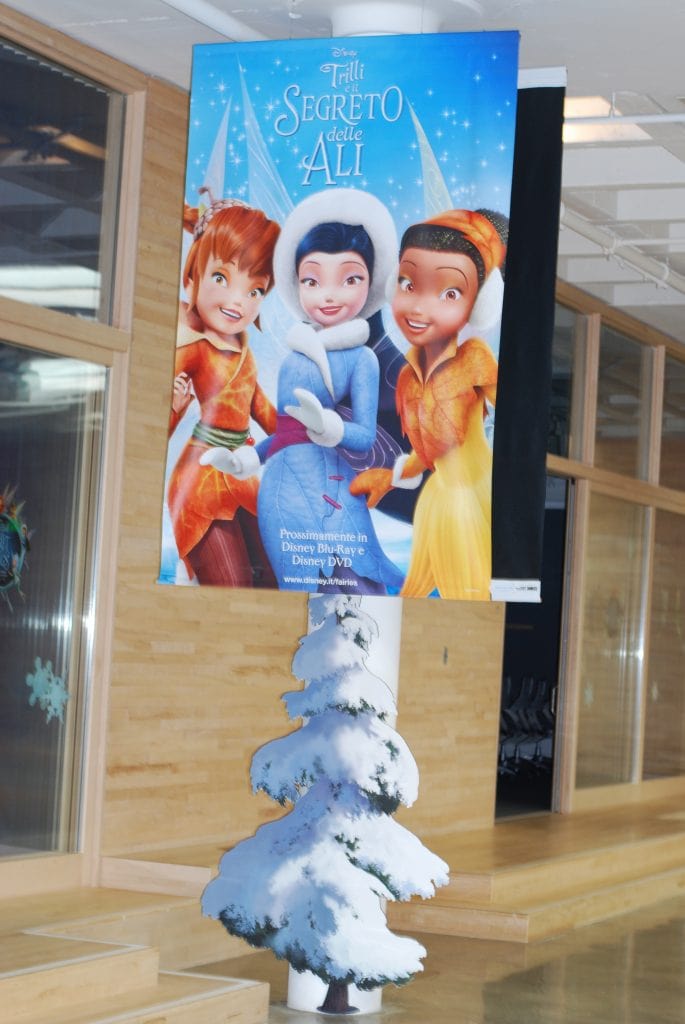 Can you tell us about the fairies hair?

I wanted the winter fairies to be a little hipper than our warm fairies.They had a little different look- a little more angular and just slightly different. With Peri’s hair, we understood what we wanted it to look like but it needed to look good from all sides. As you get into CG and you have to model something and it’s very difficult. We had to ask how does the hair really look in that scene? With real hair you can kind of fluff it up and put some hair spray and it will look okay but you can’t really do that in CG. You have to actually really know the construction of it. The idea came that we would hire a hairstyle expert to do that. We interviewed a couple people on the phone and the moment I talked to Ken and told him what the story was about he goes I am in. This is a guy that travels the world for different women’s causes and is in love with this idea of bringing world together. We brought him on and he dyed the wigs of Periwinkle’s hair in his bathtub the night before. He brought in this beautiful model and the hair was like down to here and he literally cut the hair in front of us throughout the day so that our technicians here that have to actually create Periwinkle could see moment to moment how to actually make that style work. What I told him was that she needs to look good on the red carpet from 360 degrees. That’s the goal. It was a fantastic process.

Disney’s Secret of the Wings will be available on Blu-ray 3D, Blu-ray & DVD Combo Pack, DVD, and HD Digital October 23.